The Monks: The Transatlantic Feedback 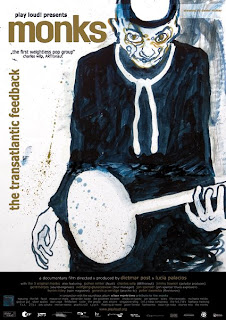 I didn’t really understand The Monks the first time I heard them and was never a big fan of their music until I saw the documentary “The Monks: The Transatlantic Feedback” (excellently directed by Lucia Palacios and Dietmar Post) on the Sundance Channel recently. Now I’m totally obsessed with those noisy psychos. “The Transatlantic Feedback” is a great documentary and reads like a Tony Curtis military comedy from Hell. It’s the story of five enlisted men in the Army in Cold War-era West Germany whose infantry duties consisted of washing the General’s car or for bassist Eddie Shaw measuring bazooka artillery projectiles. To pass the time they hit the decadent Berlin club scene (which spawned The Beatles) playing covers as The Torquays. After they’re discharged from the Armed Forces they decided to stay in Germany and continue playing the clubs, catching the eye of two advertising men, Walther and Karl.

Walther and Karl molded the boys visually into wearing all black, hangman’s knots for ties, and shaving the middle parts of their heads like ascetic monks, a pretty bizarre reaction to the now popular Beatle haircut. Musically they were molded as well: as Eddie Shaw explains it: “Where there were four chords, you narrow it down to only one. If there were six lines of lyrics, can you shorten it down to only two?” Musical and lyrical minimalism was part of their new order. “Some of their ideas were brilliant”, guitarist-singer Gary Burger recalls, “but some of them were too crazy for us. We had to say at some point, ‘We’re not going to do that!’”. One of the humorous aspects of Walther and Karl’s management was a written manifesto, read laughingly aloud by Shaw: “You must always look, act, move, walk, talk like a Monk, but above all else you will not be a Torquay”.

The Monks’ sound was incredibly assaultive with some of the most incendiary feedback-drenched fuzz guitar playing from Gary Burger, hypnotically semaphore organ playing from future IBM exec Larry Clark, and the most bizarre banjo playing in history from Dave Day. Eschewing folksy, melodic playing for violent chord-bashing, Day plays his banjo like a percussive instrument, doubling the beats the drums are pounding. At one point during “Monk Time” he even replicates machine gun sounds on his banjo. Brilliant stuff! 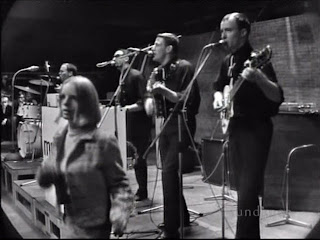 And how about “Monk Time”, with the most schizophrenic set of lyrics screamed by Burger, bouncing bipolarisms at the drop of a hat. Anti-war: “Why do you kill all those kids in Vietnam?” Pro-war: “Mad Vietcong! My brother died in Vietnam!” Anti-music: “Stop it! I don’t like it! It’s too loud for my ears!” Pro-music: “What do you mean, Larry? You think like I think, you’re a Monk, I’m a Monk, we’re all Monks!” Talk all you want about hip irony, this was strong shit for 1965 when everybody was groovy.

The stern Germanic influence continues on a song with mournful church organ and chanting Monks singing, “Got a reason to laugh, got a reason to cry, be a liar everywhere, Shut Up! Don’t Cry!” and then slipping a little Satanism in Higgle-Die Piggle-Die, “Way down…to Heaven!” The negativity hits a feverish peak with the amazing “I Hate You”, Burger’s voice recalling classic David Lee Roth (tell me I’m wrong!) wailing, “I hate you with a passion baby, My hate’s everlasting baby!” The music never once loses its edge, guitars burning through your eardrums, sleazy organ and that nutty banjo bashing itself into your skull.

Once Walther and Karl parted ways as band managers the band slowly unraveled. Onstage fisticuffs, dropping the Monk look, record industry indifference, and drummer Roger Johnston leaving the band led to the guys’ return to the States, with the exception of banjo-guitarist Dave Day running a pub. “If I had stayed in Germany, I probably would have died there”, admits Shaw, emphasizing the vice-crazed “anything goes” lifestyle of decadent Berlin, still crazy after the legendary “Cabaret” era.

Looking back in retrospect, the band attempts to whitewash their lyrics by claiming that because of attention focused on “only one song” their music “wasn’t really political” (“Monk Time”) but you can’t get more political than “Complication” with its lines of “people kill for you, people die for you” and the lyrics for “Shut Up” have political connotations (“Be a liar everywhere, Shut up! Don’t cry!”).

Burger, Day and Shaw seem to be the most forthcoming in their analysis of the band while Johnston seems very saddened by the experience and Clark is a man of few words, but that’s okay. Walther and Karl, both long believed dead, declined to be interviewed for the film, stating that a manager’s job is to stay in the background. Shit, that’s refreshing!

The film ends much like “New York Doll”, the band’s dream of playing New York finally realized by doing a reunion show to scenester celebrities like a pre-op Genesis P. Orridge, Peter Zaremba (Fleshtones), and a super-twitchy Jon Spencer. The band looks thrilled as fuck to be playing again, and fortunately didn’t show signs of losing their edge at all, still playing with an ageless intensity. Burger’s lead guitar lines still boil and Day’s mental case banjo strumming still pounding like a musical jackhammer. Still wearing their legendary black shirts, Dave Day quips “we don’t have to get the hair styles anymore, we already have the bald spots”.

Although “The Transatlantic Feedback” is a documentary on one of the most obscure bands in rock directors Palacios and Post did an amazing job with old TV broadcasts, band interviews and Cold War newsreel footage.

Shortly after the film wrapped drummer Roger Johnston passed away, but the band continued to play the occasional reunion show in Austria and Germany (clips available on YouTube). Unfortunately, Dave Day passed in January so it seems pretty doubtful the band can really play again, but their mark in rock history is assured. While any band can release one album and disappear, it takes stunning performances and brilliant songwriting to make that one album stay fresh and immortal in people’s minds, and The Monks are one of the small handful of bands that have accomplished just that. It’s always Hop Time, it’s Beat Time, it’s Monk Time. 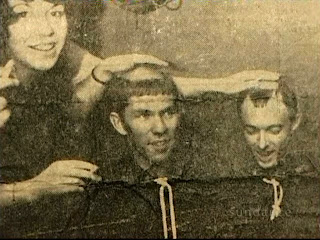 I was never a fan of the banjo till I heard this band.

I Love this band!!