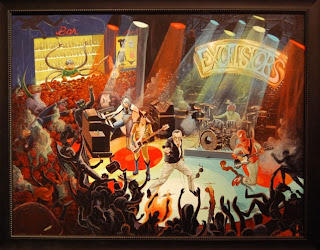 There are two kinds of comic book fans, Marvel fans and DC fans. Since I'm a DC comics fan I never warmed up to Marvel much. Nevertheless, I always found the God-like status paid to megalomaniac Stan Lee to be extremely obscene. When I heard there was a group show at Hollywood's own Gallery 1988 paid to Stan Lee, not Marvel Comics and the hard-working geniuses who worked under him, I was intrigued. How does a self-loving prick like Stan Lee rate a show? Will Jack Kirby's ghost show up and take a dump on Lee's worn-out toupee?

Tributes like this I would accept like a burning spear hemorrhoid, which would probably resemble Spiderman. There were few paintings that actually could be called "art" and most of it was just plain bad. Let's cast the swine before pearls: When the artists weren't busy imitating Mark Ryden or a kid's Fruit Roll-Ups ad (you know when the kids are bugging their eyes out like speed freaks), it was just bad Napoleon Dynamite fan art. I actually missed the liger!

He who (cannot be named) should have their thumbs hung:
1) He who painted Dr. Doom giving Ozzy devil metal fingers
2) Stan Lee pencil sketches
3) He who painted "The World of Stan Lee" and then cribbed a load of Jack Kirby images...you're a douche
4) He who painted Stan Lee on stage with Marvel heroes rocking out in a band called The Excelsiors...you're the biggest douche of all I saw a terrible painting of the Hulk going for $7000 (the most expensive piece there) and it was the stupidest thing I ever saw. The horror set in when I discovered it was my next door neighbor's painting! I also a beautiful color box of Mr. Fantastic that didn't seem like art to me but belonged in some stoner teen's rec room. By the beer bong.

At least some people tried, there were paintings that had virtually nothing to do with superheroes. If they couldn't get into the comics frame of mind they should have fucked off. 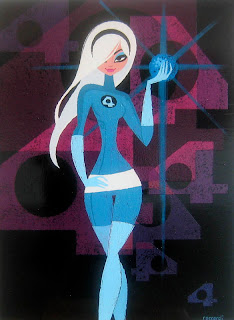 Who was good?
1) There was a nice painting of Dr. Strange by Nic Cowan. Unfortunately it looked like any image from the Powerpuff Girls. Bummer.
2)Yoskay Yamamoto's painting of Thor was excellent because it was not only a cool tribute but showed an ORIGINAL art style not to be seen in the rest of the room. His lines and composition made me a fan.
3) Chris Reccardi's painting of Sue Storm/Invisible Girl was very stylized and well-done. Every line was perfectly executed, and again, he won a fan.

To Gallery 1988's credit most paintings were priced to move (under $800) so the art fan gets some great new shit...even a cool stoner light box of Mr. Fantastic. 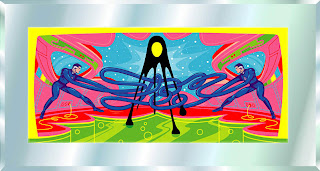 You are so right on. I saw this show and have to agree. The Stan Lee band Rocking out made me want to smash things like the Hulk. So bad.