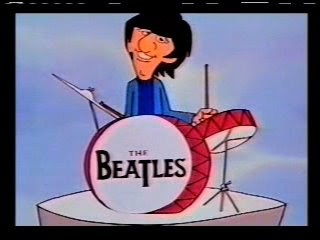 It ain't easy being green and it's harder being Ringo Starr. The only Beatle that never got the respect he deserved, in a way it's easy to see why. Flashing a peace sign every three seconds like a trained chimp at Knotts Berry Farm, it's a meaningless gesture when you have a history of spousal abuse. He had to enter a 12-step program because he drunkenly kept beating his wife Barbara Bach. I guess his peace sign didn't extend to being nice to his woman.
Before we hang Ringo here's two reasons why he's an awesome Beatle:
1 - Of the four boys he was literally a walking cartoon character - he was made for the cartoon show! With rings on every finger, his basset hound face and deadpan humor (he coined the expressions "It's Been A Hard Day's Night" and "8 Days A Week" among others) he was made for cartoons. It's no wonder he was the focus of both Beatle comedies, he was a one man - Monkees TV show.
2 - He's a great drummer, and thanks to producer George Martin's brilliant mixes recorded some of the most chilling drum breaks in rock: have there been more propulsive drum beats in music than "Tomorrow Never Knows" (Revolver), "Birthday" (White Album), "Magical Mystery Tour", "She Said She Said" (Revolver), or the spazzy drum solo on "The End" (Abbey Road)? He's a more inventive drummer than Charlie Watts, who's been playing the same lazy drum beat for the past 40 years. Fuck him and the rest of the suck-ass Rolling Stones.
"Help!" is getting a Special Edition DVD release this October 30th. Get it or rent it, prepare to enjoy the fabulosity that is Ringo Starr.
Posted by Andy 7 at 6:34 AM

i love him. and i really agree with you about his drumming HE ROCKS!!!