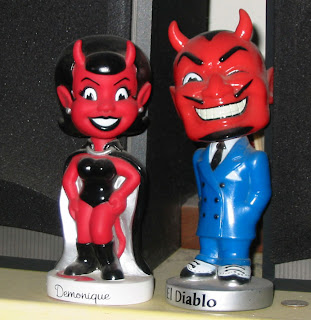 Parties always sound more exciting than they really are. You go there with high expectations and don't worry, you'll always be let down. There was the party where the TV played a DVD of "Wizard of Oz" with some lousy Pink Floyd album droning in the background LOUDER than it had to be. THAT'S NOT FUN.

Or the industry party where instead of everybody laughing about the fun they had on a shoot or spreading funny gossip everybody's busy passing out business cards, head shots, resumes, um, you know, netjerking. THAT'S NOT FUN.

How about the birthday party that takes place at a bar and everybody has to pay for their own drinks? Isn't that called going to the bar with friends? That's not really a party, and no, THAT'S NOT FUN.

How about the party where there's no music being played because it interferes with everyone talking about their endlessly fascinating selves? THAT'S NOT FUN.

I hate the party where you're the only one laughing or making jokes and everybody looks at you as if you're Count Dracula. You find out months later you're off the party list with those people. THAT'S NOT FUN.

A party is about the three L's: Liquor, Love and Laughs. Anything else IS NOT FUN.
Posted by Andy 7 at 7:31 PM