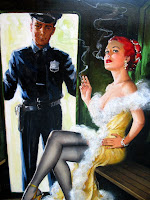 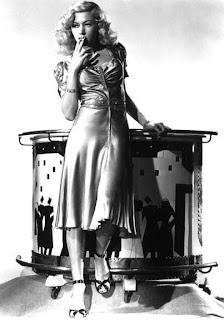 Aaagghh...what a fuckin’ day its been. Full moon time. Asshole time. People walking with a lit firecracker jammed up their assholes. People acting crazy, people getting violent over nothing, Blackie thought, who’s minding the fuckin’ store?
Blackie walked down the sidewalk in a daze. Funny, it was dimly lit, but it was jammed with these punk rock kids. He felt a nudge in the ribs.
“Hey”, he turned to see a punk chick with spiky hair staring at him strangely. “I asked you if you had any spare change”.
“If I have a dollar...” he scratched towards his crotch, missing his left pocket, barely sustaining his consciousness.
“Dude, are you alright?”
“Uh, I just had my appendix taken out. Hurts like shit. They wanted me to stay in bed for a few days...I had to get out of there”, he finally pulled out a twenty dollar bill. A police car slowed down, and a bull shone a spotlight from the car window into the faces of the punks milling around on the sidewalk. The light hit Blackie in the eyes.
“Aw, shit”, the girl groaned, “I just bailed home, an-”
The policeman glanced down at a photo and nudged his partner. “I think that’s him. The Supermarket Shredder”.
“-sixteen. I’m not going back-”
“-maybe we should take him in. C’mon, partner”.
The bulls leaped out of the car, hands at their holsters like in a cowboy movie, ready for action. The punk girl grabbed Blackie’s hand and tugged him around the corner. “Hey!” the cops yelled and broke into a run. The girl slapped the twenty on the ticket counter in front of the nightclub.
“Salt Lake fuckin’ City. Rather eat a year’s supply of cat turds before I go back to that pisspot. Fuckin’ pigs”. Blackie turned around. The cops were gaining on them. She tugged him further into the club. The club was packed with kids, and the band on stage was Beehive 2000, guitars ping-ponging and ricocheting against each other, pre-recorded tapes screeching at ear splitting volume while the rhythm section pounded away like a freight train crashing into a house. The singer turned on a chainsaw, hung it around the microphone stand, and then turned on a steamhammer.


The punk runaway yelled over the noise, “Ah, dude, I can sure use a drink”.
“Twenty dollars is all I had”, Blackie groaned. “Here, try this”. He pulled out a large bottle of industrial strength cough syrup from his leather jacket.
“Ooh, baby”, she hooted, “I can sure pick ‘em!” She took a pull from the bottle. “Yeah!”
The singer on stage now had a sledgehammer in his hands and was beating on a loose car hood with it. The crowd cheered him on. Blackie took a pull on the hooch.
“Well, well, what the fuck is this? Blood hasn’t even dried yet and you’re already robbing the cradle!” a tall-assed blonde glared at Blackie.
“Barbara!” It was his ex-wife.
“This is what you leave me for? This Romper Room slag?” Barbara sneered. “Say, honey, you must be using my old man’s dirty rubbers for a pacifier!”
“Fuck you, bitch! Start trotting or I’ll stomp your cunt into cold cuts!” punk baby shook her fist at Blackie’s ex.
“You sawed-off gash, I’ll-” Barbara grabbed Punk Jailbait by the neck. Punk Missy retaliated by pulling Barbara by the hair. They struggled and Blackie just stood there guzzling on the sticky sweet syrup watching the melee. Something else grabbed his eye. The two policemen were walking through the crowd under the front of the stage. The singer on stage swung his sledgehammer and accidentally knocked over the mike stand with the chainsaw on it, flying off the stage, instantly decapitating the policeman, his headless body shaking with blood spurting out his neck like Old Faithful.
“Yay!” the audience cheered. They thought it was part of the show. The policeman’s head was tossed around the crowd like a beach ball.
“It looks so real!” one kid gushed.
The steamhammer flipped off the stage and kicked the other cop in the head, knocking him unconscious.
“Yay!” the audience roared, stamped their feet and whistled loudly.
“They’re even better than their records!“ another kid gushed.
“You fuckin’ cock holster, I’ll-” Barbara smacked the punk girl with a loud crack.
“Dykewhoreshitgobblinsow”, Punk Cupcake kneed Barbara between her legs real hard. Barbara slid down on a pool of spilled beer. Blackie tugged on his bottle giggling at the scene and briefly glanced at two bouncers tossing a punker out the back door. What caught his eye was outside a line of helmeted riot cops were approaching the club. They were well choreographed, just like the Rockettes, swinging billy clubs left and right in unison, legs doing the same.


Ah, Busby Berkeley would’ve shot a load in his shorts. A bottle flew from a crowd of punks and hit a cop in the head. All at once the chorus line broke up and cops were running towards the nightclub.
“Jesus!” Blackie sobered up and grabbed the punk girl. “Let’s get the fuck outta here!”
“Not yet! I wanna finish her off!”
“Fuck it! We gotta move!” He yanked her arm and pulled her out a side door as the cops burst in through the back door. They ran down the alley. A few explosions erupted behind them. Gas seeped from the nightclub, floating up into the nighttime sky. Full moon time. Asshole time.
Posted by Andy 7 at 7:02 PM