God Save The Dogs 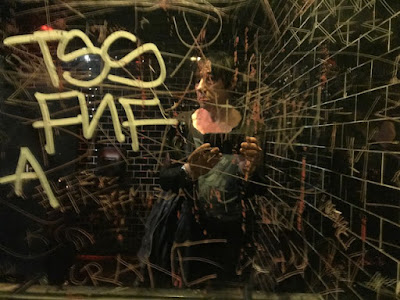 What beautiful skin she had. It was so clear and pale, like immaculate porcelain or the most refined ivory. Such flawless pigmenting, why you could see the colors of every vein in her body as if it were some newly printed roadmap.

Her veins were like a stained glass window in a church. It suited her vocation rather well. With her round face and high forehead she looked like The Virgin Mary, and so she was.

Abigail made a living as a model for artists playing The Virgin Mary. She’d arrive at their studio or classroom in her black goth clothes with a suitcase containing her sandals, Holy Mother gown and large plastic baby doll.

The baby doll came with a blanket with the satin seam pulled off for authenticity. Some artists fancied her exposing her boob to show her breastfeeding the future deity. It’s a living.

Like a paid sex worker she’d ask the artist, “How do you want it?”

“Eyes downturned, as usual. You’re doing something holy”, ordered the artist. Hence she complied and the artists industriously sketched away.

So there she was, clutching her cold baby doll to her plump, pale breast, making sure not to show too much and wrapping the sides of her robe to cover just enough from making things too tawdry.

While she posed she contemplated about what club she was going to go to that evening: would it be Tentacles or Eulogy? Tentacles was the S&M-styled club which played industrial-strength industrial music. She could already hear the pulsating bass line of a KMFDM classic in her head and there would be some severe Rammstein to go.

Eulogy was more of a doom & gloom boom ritual, a darkened room with smoke machines pushing out volumes of smoke while you danced to the Sisters of Mercy, Joy Division and Siouxsie Sioux singing about insane asylums.

Abigail Reeves had two profiles on Facebook: there was Abigail Reeves, blessed religious model. Her page was filled with inspirational messages and pictures of her looking blissful in a field of wheat with messages like, “Born To Be Blessed”, “Singing His Praises Every Day”, et al.

There was a separate page dedicated to her clubgirl persona, Paula Punish. Her sartorial choices were a lot different: leather, latex and simply electrical tape, all in black. Whenever it was a sci-fi theme night there was the occasional silver, but for the most part it was all black.

Two hours later: “Okay, that’s a wrap. Thanks for everything, Abigail. Same time next week?”

“Yeah, sure thing”, she’d mumble, packing Baby Jesus away in her suitcase.

Some art instructors would hand her a check, whereas others straight out handed her cash. She liked that the most.

If she got a roll of cash she’d get in her banged-up PT Cruiser and go straight to her connection’s house in Highland Park and buy a balloon. Her connection was gay so she’d cook the works, tie up and shoot her pay right there in his living room. Her last connection was straight and tried raping her while she passed out on the sofa, so she switched to a new guy.

“I love it when you bring cold, hard cash instead of promises”, Brian the connection croaked.
“Yeah, it makes everything easier”, Abigail mumbled as she watched the spoon glide above the BBQ lighter. “It’s just me and Baby Jesus”.

“Hey, listen Abigail. I’ve got company in two hours, so you can get high and hang out for awhile, but then you gotta leave, okay?”
“Yeah, cool. Gotta get ready for Tentacles tonight, anyway”.
“Tentacles, shit, I forgot about that. I told everyone I’m going to Eulogy tonight”.

“Eulogy plays the same shit every month. Fuck that place”, Abigail growled as she tightened a Stevie Nicks scarf around her arm.
“Can I ask you something? Don’t people see your arms when you model?”
“Hell, no. I wear a robe all the time. They don’t know the difference”, she took the needle from Brian and prepared to plunge it.
“Cool. Hey! Can you get me and my friend into Tentacles tonight?”
Abigail sank the needle into her arm.

Then there was the very next day as there always is a very next day in a story. Abigail Reeves got busy with her social networking. The part-time Virgin Mary went to Facebook and checked out her Messenger: the same old scene with random guys she friended posting pictures of their pricks, some impressive but most looking like expired items from a Bait and Tackle shop.

Most of these messages were accompanied with lovesick messages and meager amounts of money promised to her PayPal account.

Her brief attention was curtailed by Chili, her Chihuahua who was trembling horribly. He limped over to her chair as she was finishing her breakfast and proceeded to simultaneously vomit and eject a stream of wet diarrhea out his tiny behind.

Chili whimpered and lowered his bony little head to the floor as his rectal issue continued to stream on her hip parquet floor. Abigail sprung into action by picking up her cell phone and taking a picture of Chili looking sad.

This prompted the quickest Facebook post Abigail ever posted: under the shot of Chili with his head hung down. “HELP, GUYS, MY PUPPER IS SICK, I NEED FUNDS TO GET HIM MEDICAL HELP”.

Many of her lady friends posted crying faces to show they were sympathetic to her plight, while the loyal thousands of men all pledged to PayPal her more money. Penis portraits would most likely follow, as well.

The professional Virgin considered all the men who followed her and decided to open a Patreon account to sell her nudes, as well as a Kickstarter with many portraits of Chili looking happy. You know, there’s no happier looking dog than a Chihuahua.

The men grabbed the drama of a sick Chili to their collective breasts while a few girls trolled her: “Didn’t you ask for money for a new car last year? Well, where is this new car, you fake bitch?”

Abigail took to threatening many of her male followers with unfriending and even blocking if they didn’t send her the required amount to save her pupper’s life.

Well, the money came in small streams. Since Abigail was an addict it was hard to tell how much of a share the veterinarian was getting.

They say that work is the great panacea to a person’s problems, so Abigail packed up Baby Jesus in her suitcase and wondered if she was getting a fistful of cash at the end of the night. 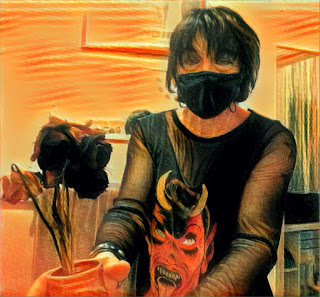