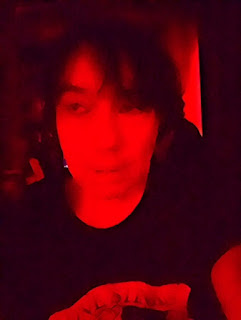 The sun was blindingly bright, so bright that the only relief would be to close one’s eyes.

Waves of heat undulated and danced in front of Sam’s eyes as he walked slowly down the desert road.

The road was darker than the sidewalk, so bright it made him dizzy.

He was under the thumb of solar imperialism, and the sun owned everything, and everyone lock, stock and barrel.

He was dizzy, thirsty and hungry. Walking for miles under the burning sky had a transformative effect.

His flesh couldn’t melt, but his soul could, and it melted with heat waves dancing all around him like ghosts in the desert.

His back was drenched with sweat from the thick backpack weighing him down and intensifying his body heat.

This was the kind of day where wearing socks didn’t make any sense, because his feet felt the heat burn right up through the boots he was wearing.

The soles may as well be cardboard for all the good they did.

The tall purple mountains which wrapped around the town looked on, not caring.

To them he was hideous – but their thatchy, hairy legs poking out of brightly colored shorts was acceptable.

He returned their horrified stares until he heard a scratching sound below him.

It was a small lizard, upside down, thrashing around, trying to bring itself bolt, upright again.

Sam leaned down and picked up the lizard, closed his eyes shut, said a few Hail Marys and then bit the tiny lizard’s head off.

He chewed on the rest of the still thrashing body like it was a chaw of beef jerky, pretending the blood spurting out of the critter’s body was catsup.

Scooter’s father stared with a repulsed sneer while his fat blonde wife dialed 911 on her cell phone.

She wished Sam was black so she could get on the news.

Busting a homeless white man wasn’t going to get her in the papers.

Sam threw the reptilian carcass down and walked over to the gas station across the road.

Scooter’s mom tossed her mullet and yelled, “HEY YOU DON’T YOU WALK AWAY YOU STAY RIGHT HERE, MISTER!”

Sweat drooled down every millimeter of Sam’s corpus.

So delirious from the heat, he walked up to a gas pump and kicked it angrily thinking it was a soda machine.

A few yards away sat a solitary gas can and in his delirious state thought he was looking at a thirst-quenching liter of A&W Root Beer.

Sam unscrewed the cap to the can and poured the remains of what was left in the can.

Wiping his chin, he continued his trek down the road to the baritone screaming of the vacationing housewife yelling into her cell phone.

It can be assumed the local police didn’t care about the homeless eating microscopic wildlife.

A coyote, yes; a road runner, yes; maybe even a vulture – a tiny lizard, no, no bother.

In the bright white light he saw vinyl-topped Cadillacs roll in to heavily gated golf courses, the old white men still holding on to their huge sedans in their rejection of hip-hop cruisers.

He could have sworn they were twerking out of their hip-hop cruisers.

Everywhere he went there were misters spraying thin jets of water out as lawn sprinklers ejaculated over all matter of desert flora.

Out the corner of his eye he espied a police cruiser slowly trailing behind him.

It made him paranoid, so he took a sharp turn around the corner.

It led to a quiet side street, but side streets in the desert are never truly quiet, because you can always hear the abrasive music of insects scratching their legs and crackling their antennae all through the day and into the night.

There were rows of banged-up houses lining the road with campers sporting flat tires and sunbaked speedboats that hadn’t touched water in years parked out in front.

“SKYLER PICK UP SOME DORITOS AT THE STORE!” yelled a voice from inside a house behind a teenage girl’s back.

The teenage girl in shorts and flip-flops had corn roll hair.

‘AND -SKYLER!-SKYLER! BRING BACK SOMETHING TO DRINK!”

‘YEAH, ALRIGHT ALREADY!” Skyler yelled, picking up her speed away from home.

The word “drink” triggered Sam’s bladder into wanting to unload, so he warily retuned to the main drag, looking around to make sure the cops were gone.

All he could find for the next half-mile was a private tennis court.

With every step he took the back pack felt heavier and heavier, weighing him down.

He could feel every pound of his load pushing down his back.

The weight pushing down his back created a considerable degree of tension to his bladder.

Too many palm trees were covering the front of the court, making it impossible for Sam to jump over a fence.

Sam walked towards the driveway where a parking attendant was opening a car door and letting a pair of guests out.

“HEY!” he yelled at Sam as he walked past him.

“I SAID HEY! WHERE DO YOU THINK YOU’RE GOING?”

A well-groomed silver haired gentleman in a white tennis outfit got out of the car, pushed in his aviator shades and said, “Let me handle this, Carlos!”

The silver haired gentleman’s companion, a young man in cutoff shorts aggressively grabbed Sam by the arm and said, “The man’s talking to you, Buddy!”

Sam tried wriggling free of the youngman’s grasp, but the grip was too strong for him.

“Get off me? Can you believe this punk?” the hustler announced to his benefactor and the attendant, getting cockier by the minute.

The hustler threw Sam against the automobile hood, slamming him hard.

“Leave him alone, Brian. I’ll just chase him out of here”, Carlos appealed.

“No way”, Brian the hustler growled. “Not on my watch, bro”.

Brian quickly slammed Sam against the Cadillac three times in a row.

Sam couldn’t hold it in anymore.

He undid his fly with his free hand and pulled out his hose.

Sam held his joint out and peed all over the Cadillac.

“YOU PERVERT, WHAT THE FUCK?” Brian yelled, still holding on to Sam.

The heat radiated on Sam’s urine, igniting the gasoline he consumed a little while ago.

Sam was instantly immolated by the burning car, and with him Brian.

The attendant ran to his kiosk to call the Fire Department, but it was too late to save Sam, Brain and the overpriced American automobile.

The masculine bonfire spread due to the dancing heatwaves caressing the flames and spreading them to the nearest palm trees.

The flames spread throughout the entire court yard.

Palm Springs was on fire.