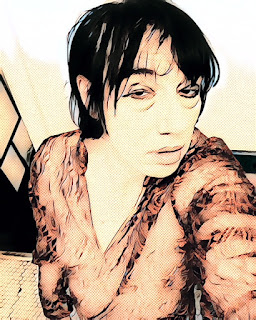 It’s never been considered normal behavior for a grown man to have a conversation with electric appliances, but that’s just what Chris was having with his television set.

He shook his head disgustedly in front of the set by what he heard on the network news.
“That’s the most ridiculous load of bullshit I’ve ever heard”, he grumbled. “What are you doing transmitting this bullshit to me, anyhow? I can’t believe the idiotic crap you’re programming to me these days. Shit!”

The source of his revulsion was a news clip of a far-right statesman, old, white and gray of the male sex ignorantly stating in pompous tones that…”rape is perfectly legal between two consenting adults”. This remark made Chris’s head nearly explode.

Rape wasn’t sex. What was this senile moron talking about? Rape was extremely violent beating of an innocent person and violating their body and destroying any semblance of their self-respect and security. It was the ultimate degradation of a human being, scarring them for the rest of their life. It has made victims go insane and in some cases commit suicide.

Chris’s head throbbed with anger, wishing he had someone to slap, beat, kick, bite scratch or maim. Lawmakers advocating assault; it was the end of all rational thought to him and it made him furious.

Chris had the peculiar problem of being confused for being a member of the fairer sex, a girl, a woman, a lady, etc. Was this point of confusion due to his looks being somewhat feminine or that men simply were too lazy to deduce that he was a man who looked a wee bit different?

Case in point, when he sat in a restaurant with a girlfriend the waiter would ask, “And what would you ladies care to order?”

Was it really so hard to distinguish between him and other women or were these waiters too thick to recognize the difference? Chris never protested aloud about this faux pas but it made him tired time and again.

But it didn’t just come from service workers; he’d get the same remarks from his girlfriends, too.
“I almost hate you – how dare you have better legs than me? Well, as long as you don’t wear shorts no one will ever know”. Ha ha.

What made the whole matter ridiculous was that he wasn’t terribly androgynous. People simply didn’t want to make the effort to notice him, as if passing him by consisted of glossing over the finer points of his appearance. He was not only faceless but sexless.

Things finally came to a head when his girlfriend blurted out to him, “I miss the old Chris. I mean, look at you! Ugghh! You’re just half a man!”

Left to his own devices, Chris began the detestable sojourn of going out alone at night. Now that he was without girlfriend most of his friends had taken sides, meaning his nights were going to be spent alone.

He came home late, about 1 am, and it was a weeknight, in a slight buzz from a few weak drinks tossed back reluctantly. The drinks were now just a distant echo running through him like the forgettable music played in the club.

He lived above a store front on a main street, and he reached for his keys as he approached the entrance. The street was empty and still, no cars to be seen for miles. The atmosphere was dark and tranquil, but it was abruptly disrupted by masculine sounds of whooping and whistling coming closer.

He heard sounds of old boys laughing derisively and getting nearer by the minute. He slightly pivoted to see what the row was from the corner of his eye. Old boys, old boys…stupid, klunky late teenage boys in baller caps and board shorts riding on stick scooters down the sidewalk towards him. Sharp, little lights beaming out towards him from these little stick things.

“I don’t have any money”, Chris grumbled under his breath. “What the fuck do they want?”

Chris broke out of tension in his body for a second when he got it. “Oh, for Christ’s sake”, he gave a cold chuckle.

“HEY BABY, GET OVER HERE!”
“NOOKIE NOOKIE NOOKIE!”
The boys in scooters were already on his block getting close enough for trouble, so he very slowly pivoted towards them so they could get a full look. He fisted his keys so the largest one stuck out of his fist like a claw jumping out of his knuckle.

“HEY BABY!”
He turned full on to them, revealing a cold, hard grimace pretending to be a smile. He caught the horror in their eyes and wanted to laugh out loud.

They spun their scooters into a complete 360 and almost crashed into each other in the process. Chris could hear some more scattered yelling fading down the street, disappearing into the concrete darkness. He was amused but thanked himself it didn’t turn into some sort of gay bash.

Chris turned the key in his door, walked up the stairs to his apartment and decided to end the lone wolf bullshit as soon as he had the chance. Maybe tomorrow. 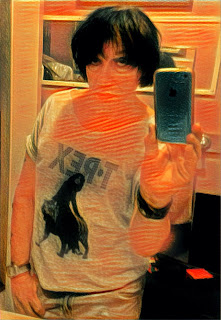