Writer's Block Can Be Deadly 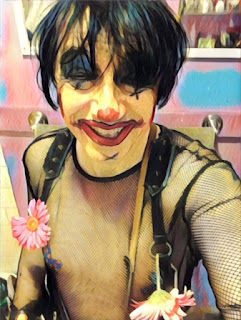 I'm going through a pretty long period of writer's black. It's been going on for about a year already. There are several factors involved: the destruction of my marriage by my insane ex-wife, an exhausting seven-day a week work schedule that begins with a 5 am wake-up call, and the realization that the United States has embraced both Nazi Germany and the Soviet Union as its current role models. I feel so agitated that sitting down to punch out another punk rock crime potboiler has become downright impossible. The distractions and destructions have become paralyzing.

But in the words of super-clown Leo Sayer, The Show Must Go On. My writing can't stop and damn my eyes for stopping. Even crap writing is better than no writing at all. I'll make an effort to produce more work in the coming year. I'll try to balance it along with my folk music project (as mentioned in a previous blog). In the meantime, what do you think of the new Quentin Tarantino film, Once Upon A Time In Hollywood? Interesting that, a story about a grade-Z western TV actor who hangs out with a stuntman and gets implicated in a famous murder in the swinging Sixties? Sounds like my novel Crash walker, a lot like my novel Crash Walker. Ha!

Well, I gotta go now. Got to do my goth clown videos and other trash hobbies and damn, maybe even squeak in some writing. I've got a job to do, damn it.