We Are The One: A Look At Mickey One 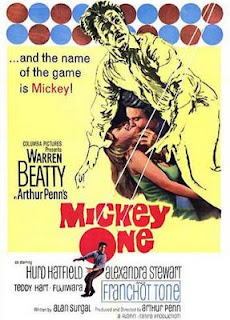 One of my favorite films of all time is Mickey One. It was released by Columbia Pictures in 1965 and directed by Arthur Penn and starring Warren Beatty. Mickey One is the story of a lounge stand-up comedian who’s on the run from the mob for reasons left open to conjecture: Were there unpaid debts? Was he playing around with the mob boss’ mistress? Was he in arrears for countless favors from the mob?

Mickey runs away after being called on the carpet by club owner Ruby Lapp (played by Franchot Tone in one of his last performances). He hits the skid row section of Chicago and lifts the social security card of a rolled drunk named Mickey Wonjhowcski. which he shortens to Mickey One.

Living in a flophouse and working as a pearl diver, he has a tenant forced on him by his insane landlady. He falls in love with the girl and she recognizes his talent, prompting him to badger a tenth-rate burlesque agent, who books him into a string of dogwater lounges.

Gingerly working his way back into the nightclub grind, he hopes he won’t attract much attention, but of course with his Warren Beatty looks and enormously successful comedic talent he eventually attracts all the attention he previously hoped to avoid. Mickey One ends with him performing to a dark, empty club with a blinding spotlight burning into him with an unknown figure behind the light (the mob boss?). The moral of the story: you can run but you can’t hide.

Mickey One was made in the Sixties, an era when the mystery of the John F. Kennedy assassination greatly disturbed the country and provoked endless meditations on conspiracies, innocent people on the run for unknown transgressions, and questions of personal identity. It was an era of Kafkaesque entertainment which spawned television shows like The Prisoner, The Fugitive, Run For Your Life, Coronet Blue, and other weird programs.

Arthur Penn once said that Mickey One was his attempt to make his version of a French New Wave film, and in that regard he considered the film to be a minor failure. Part of the French New Wave influence was the casting of Alexandra Stewart as the love interest, who was Francois Truffaut’s girlfriend at the time.

Mickey One is so much more than a Nouvelle Vague homage, though, in fact it’s one of the most American films ever made. The film looks like a Tom Waits album cover from start to finish with its scenes of Salvation Army bands, hobo jungles, wrecking yards and burlesque queens (and with no Barbara Nichols in sight!). If you liked Robert Frank’s book The Americans you will love the beautiful cinematography of Ghislain Cloquet.

I’ll never forget the first time I saw Mickey One: it was in 1978 and I was living in The Canterbury Apartments in Hollywood at the time. I had a terrible case of the flu and had that thing where you wake up in the middle of the night and can’t go back to sleep. I turned on my black and white portable TV and watched The Late Show and there it was, Mickey One.

I felt as if I was getting a broadcast from outer space. It was the parallel reality I thought I’d never see. Warren Beatty and his absurd America oif exploding industrial art called YES really sold it for me. From that moment on I called myself Andy Seven and I’ve never looked back, just like Mickey One.