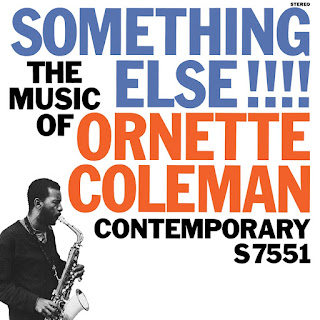 Innovation is no stranger to jazz, but fewer people made a radical difference in sound as Ornette Coleman did. Coleman created new approaches to music and the way we heard it in much the same way Picasso did. The road to innovation is a rocky one, guaranteed to upset the most-minded purists, and in Coleman’s case it turned violent on more than several occasions.

On the first Coleman album I heard he dispensed with the dominant piano in a quartet setting, letting the horns lead the band. And what horns they were! Ornette played a Grafton plastic alto saxophone, and his playing style was a mixture of hardcore fifties rhythm & blues and free jazz. If the stretched out jazz alienated you he would return to some bluesy swing on his horn, bringing it all back home.

But that album cover was punk rock personified via free jazz. An intense Ornette in a beat, threadbare sweater with unkempt hair blasting atonal skronk on a white plastic saxophone, as iconic an image in music as any I've ever seen, prompting me to pick up my Conn Mark IV tenor and howl along to the album. Yeah, that's something else! I wanted to be just like that awesome wild man on the album cover. It was all magick and musick, and as a teenager Ornette set me on fire. 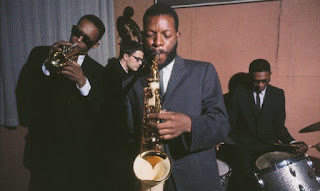 I first heard about Ornette Coleman from interviews with Captain Beefheart, who wished all his fans “drank from the drinking pond as Ornette”. Robert Palmer, jazz critic for Rolling Stone Magazine also stated that Coleman was one of the leading innovators in jazz, no small credit given that in the early Seventies jazz was at its peak in creativity.

With that information in mind I sought out Science Fiction, Coleman’s first release for Columbia Records. The music was super-charged and intense, fueled by a driving rhythm section largely manned by Charlie Haden and Charles Blackwell. The trumpets, either played by Don Cherry or Bobby Bradford were strong and angry, and Dewey Redman’s tenor sax playing was from a whole different dimension. It was the jazz version of punk rock: fast and furious.

Of course, no one album by Ornette tells the whole story, there’s The Empty Foxhole with his then 6-year old son Denardo playing drums and Ornette occasionally playing violin and trumpet, too. There were more albums letting us know we were in for something new and unexpected: titles like Change of The Century, Tomorrow Is The Question, The Shape of Jazz To Come, Free Jazz, and many more.

Speaking of The Empty Foxhole, I just wanted to call attention to Denardo's great drumming on that track. With Ornette playing a dirgey trumpet, Denardo hits his snare conjuring up nightmarish images of a burnt-out soldier marching through a bombed out battlefield. I think the album was a great father & son experience. Unfortunately, that wasn't the case with my father and I. The album irritated him like crazy and every time I put it on he'd start yelling at me. He also hated The Chrome Plated Megaphone of Destiny by The Mothers of Invention but even that creeped me out. The Empty Foxhole was an apt soundtrack for many father & son arguments one summer. 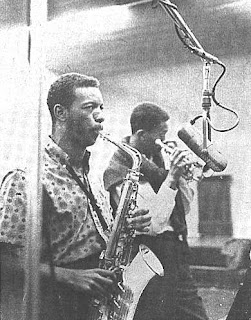 The most startling change in a career of startling changes was the 1977 release Dancing In Your Head, an album which introduced his theory of harmolodics, which very simply put, is a system where every musician can play freely at the same time in a band while supporting the other musicians. The result was an album that sounded like the soul sister to Beefheart’s Trout Mask Replica album.

Dancing In Your Head had such a profound influence on my friends and I that we added Theme From A Symphony to our band Arthur J. And The Goldcups' set. The pinnacle, however, was finding the promotional 45 RPM single of Theme From A Symphony on A&M/Horizon Records for only 10 cents. Both sides naturally had abridged versions of that bombastic masterpiece. I still treasure my copy of that behemoth single to this day.

I remember seeing Ornette playing with his harmolodic electric band at The Westwood Playhouse in 1982 and it was a pretty wild show. There were twin electric guitarists, bassists and drummers going at it non-stop with Ornette heading the charge. It was one of those jazz concerts you remember for a long time after.

Ornette passed away on June 11 at age 85, a life filled with sounds still seldomely heard, but still inspiring and influential to this day. I still look up to him as one of the biggest influences on my saxophone playing. I also consider his humble attitude and philosophy to be a big part of my musical education. 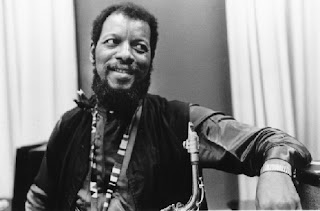