Every Bitch For Himself - Punk Rock Crime Novel OUT NOW!!!! 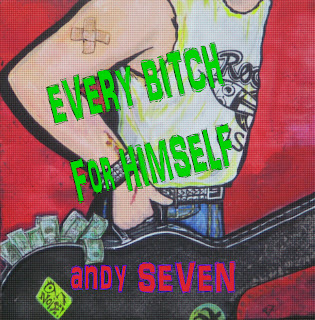 It's 1978, and Hollywood Boulevard is burning with punk rock energy and with it the advent of career criminal Big Jason Gulliver, an amoral monster in silver hair, torn t-shirt and army fatigues. Big Jason plans to knock over Rocket USA, the most popular punk club in town, using his friends who all work on the inside of the club.

Standing in his way are three psychopaths who run Rocket USA: Jack Sterling, owner of the club, a has-been television star with severe OCD; Chuck Steakhouse, punk surfer thug with a capacity for rape and torture; and Miggy Sanchez, a thug every inch the equal of Big Jason in amorality.

Every Bitch For Himself captures all the energy of the 1978 Hollywood punk scene with episodes of violent rock & roll, perverse cult rituals, and nightmarish parties. Just as punk rock bands twisted old songs to fit its explosive style, Every Bitch For Himself corrupts old film noir scenes culled from The Killing, The Asphalt Jungle, Born To Kill and The Killers, to name a few, to create a new punk rock crime novel.

Andy Seven’s previous novel Every Good Boy Dies First captured the fervent pace of the Nineties music scene, drawing on experiences from his music career to craft a chilling novel. Once again Andy draws on his memories of the 1977 Hollywood punk scene to create Every Bitch For Himself.

How and why did punk happen? Popular music split into two factions following the demise of glam rock in the late Seventies: disco and punk. There was disco for the club kids who wanted to keep all the glamour, danceability and sexual decadence of glam alive, and on the other side there was punk, which continued all the outrage and drama of glam. Like two unruly siblings both styles of music hated each other.

Every Bitch For Himself, after all is said and done, is still a crime novel. It follows the tradition of the standard heist gone wrong story, but how it goes wrong and the disaster that follows it is an exercise in severe karmic payback that needs to be read to be believed. Who gets away with crime and who doesn’t is the real kick of the story. Are there double crosses or are there consequences to everyone’s actions? You’ll have to read it to find out.

Ten things you can count on reading in my latest novel:
1. Drunken punks playing Bologna-Toss on loaded chicks.
2. Has-been TV Western cowboy stars.
3. Mods vs. Punks battle it out on the beach.
4. Squeamish Los Angeles police detectives.
5. Discotheque chase scenes.
6. Blood-drenched performance art rituals.
7. Beauty products weaponry.
8. King Kong scales the Capitol Records building.
9. Miracle Mile shopping sprees, and:
10. The world's greatest shithouse fist fight.
Yep, if it hasn't been written yet, you can count on me to write it for you. May God and Ringo Starr forgive me!

Every Bitch For Himself, Andy Seven’s second punk crime novel is available for $4.99 at all popular eBook retailers, including:


Each website provides a short sample of the novel for previewing before purchase so you can see what deviltry is brewing on each page.

Every Bitch For Himself combines two violent art forms, punk rock and film noir to create an exciting new hybrid of crime writing. Check out the new novel and experience it for yourself.