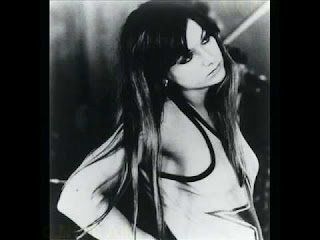 One of the most attractive releases of 1971 was an import LP that looked like a cross between a Command Records stereo demonstration album and a Euro techno album, when in fact it was neither. It was the second release from Curved Air, simply titled “Curved Air Second Album”, following up their dazzling picture disc from the year before, “Airconditioning”. The album performed well with British listeners, peaking at #11 on the album charts.

Curved Air was a product of their time, less prog and more like a hard rock band with lush symphonic sounds courtesy of Darryl Way and Francis Monkman’s keyboards and violin playing. Many of the sonic textures on the album recall Euro sex horror films of that time, sounding like they belonged in a Jean Rollin or Mario Bava movie. In addition to the vampire opera vibe of their sound was the presence of lead singer Sonja Kristina, who wouldn’t look out of place in any of these films, looking like a sister to Ingrid Pitt, Maria Perschy or Soledad Miranda.

Some of the lyrical content focused on wayward urban girls with titles like “Young Mother” and “Back Street Luv”. The pastoral textures of “Piece of Mind”, “Puppets and “Jumbo” have that lush-cum-nightmarish sound that makes me think of movies like “She Killed In Ecstasy” or “Requiem For A Vampire”. Kristina sings in a dreamy falsetto that compliments the Dracula in St. Tropez vibe of the music. 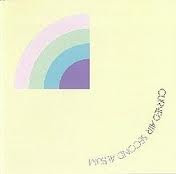 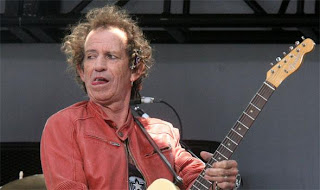 By the way, here's a picture of Keith Richards serving up some Larry Fine action for you just in case you want to believe he still looks like a badass outlaw. Put that doo rag back on, playa!

I've always had problems trying to like Kevin Ayers even though I like the idea of a prog-rock troubadour a la the great Peter Hammill. I think the reason I could never embrace him as a serious artist is because he comes off as some lazy bastard who just wants to fuck and get loaded. His records for the most part give off the image of Artist As Vacation Resort Gigolo. Frank Zappa once wrote a song called "Honey, Don't You Want A Man Like Me?" All humor aside, the scary part is that Ayers aounds like he really means it.

An album like "Shooting At The Moon" is pretty indicative of both his strengths and weaknesses, the strengths being great Henry Cow-style jazzy art school workouts like "Shooting At The Moon" and "Colores Para Dolores". The weaknesses come in the form of his bad samba gigolo tunes like "May I?" returning later in a French version just to underscore the sleaze of his advances. The paradox of Ayers is that just when you're ready to slap him for a lech ballad like "Clarence In Wonderland" he counters that with a slice of menace like "Lunatic's Lament".

At first I thought I was being a little hard on everyone's favorite blonde playboy, but even Wikipedia weighed in with, "one of the frustrating and endearing aspects of Ayers' career is that every time he seemed on the point of success, he would take off for some sunny spot where good wine and food were easily found". While I came to praise and not bury Ayers I think his preference to having a good time made his music suffer because the urge for self-indulgence and narcissism spoiled what could have been further records with the daring of "Joy Of A Toy" and "Shooting At The Moon". 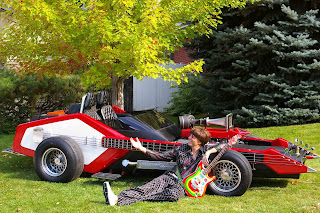 Here's a picture of the Voxmobile, and from what I understand (which means that I'm leaving room for error, so don't scream) is that guitars could be taken off the side of the roadster and played. I also understand that an amplifier is built into the car with an organ in the rumble seat, also. For further information go to http://www.thevoxmobile.com. Imagine that, now that's what I call really rocking on the road.

I Love this, you reminded me why I loved buying import albums. They looked better felt better always an adventure.
Poor Keith Richards, when is Johnny Depp going to steal that look?
I heard the Vox mobile had input jacks so you could plug in a guitar or two and play. Nice images hahaha love the ape.

Been a fan of Kevin Ayers' early solo work for years... Even back in '75, I sang a way-off-key (trying to sing so low) version of "Lady Rachel" with the first incarnations of the Nervebreakers...

But I think you nailed him here Andy... Even the ape image bears a strong resemblance...

My fave Ayers quote ran somewhere along the lines of having "writer's block & I think it is permanent"...

His last album "The Unfairground" was easily the best from him since the 70's & I was excited about seeing him play a scheduled SXSW appearance to promote it awhile back before he canceled & blew off the entire tour to go back to France & drink...

I agree, his early stuff is great, but his later work doesn't possess the fire (aka intensity) of his peers John Cale and Syd Barrett, it's just too comfy.

Poor Keith Richards, huge rock star gets laughs when his name is mentioned? Really,imagine that. And then, that picture?