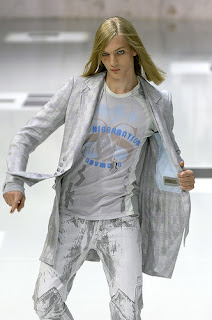 Talk about turnabout, we’ve reached it in rock ‘n roll fashion. It’s been a long time since rock musicians influenced style. In the past, rock stars as diverse as The Beatles, The Sex Pistols, David Bowie, Debbie Harry, and even Kraftwerk resonated in the way kids dressed themselves. Kids always looked up to rock stars to check out The Cool New Look.

That’s all gone now: musicians fall into one of two categories these days: 1) American Idol-type puppets, trussed up and painted up by a team of style professionals that think tossing on a distressed New York Dolls bootleg t-shirt and forking their hair like a petrified parrot is rock style; or, 2) “Alternative” guys who dress like slobs and look more like roadies than the roadies themselves. Bands have ceased to invent cool new looks we can dig, and that’s depressing.

The great irony is that a small handful of models currently embody rock style better than anyone holding a guitar or microphone. True, they’re being dressed by high fashion designers and coiffed by fashion pros, but it’s what they’re doing with all those elements that look more rock ‘n roll than anything I’ve seen in the past twenty years. 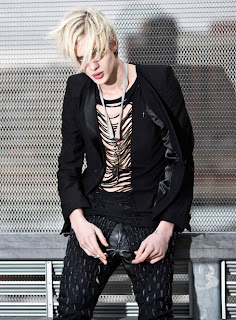 Paul Boche is from Eisenach, Germany, and in the past five years has been one of the most sought-after models in the fashion industry. His resume reads like a Who’s Who of the most cutting edge designers in modern fashion: John Galliano, Ann Demeulemeester, John-Paul Gaultier, Roberto Cavalli, Simon Spurr, Rick Owens, and Alexander McQueen. He’s currently represented by eight different modeling agencies (Holy Shit!), and was chosen to be the Face of Lanvin en Bleu in 2010. He’s already been booked to catwalk for 10 different designers this year on New York, Paris and Milan Fashion Week.

Paul Boche is a model who effortlessly emulates rock & roll style. When his hair is short he recalls David Bowie, Alec Empire, or a new wave icon from the Eighties, and when he wears it long he resembles a glam rock star like Mick Ronson or Marc Bolan. His rock star looks make you want to wear everything he’s photographed in, and it’s a refreshing change from the predictable look of models with short, chopped hair, bland faces and G.I. Joe bodies. If there’s a model I can follow like a rock star it’s definitely Paul Boche. 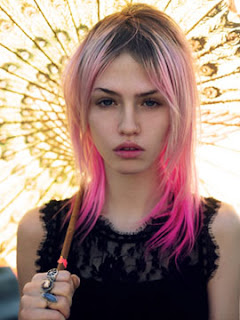 If there’s a female counterpart look no further than Charlotte Free. Looking more like a punk rock star than a fashion model, Free has also been burning up fashion editorials and shows in the past few years. Just like the best punk rock, however, her arrival on the fashion scene was controversial, the reasons being: 1) She stands at only 5’7”, a shrimp by modeling standards; and, 2) fashion snobs think her multi-colored hair looks limit her to a “Hot Topic Princess” look. Her detractors, mostly jealous females, are outnumbered by a larger group of young girls that identify with her, raising her to heroic status. Just like the best punk rock, the formalists are pissed but the kids get it.

Originally from Los Angeles, California, Free has modeled for Vivienne Westwood, Jeremy Scott, Marchesa, and Moncler Gamme Rouge, among others. Whether she becomes the model of the moment or not doesn't matter, she’s one of the most unique faces in fashion since the heyday of models like Twiggy and Peggy Moffit. And of course, you gotta love a model that gets so many snobs upset.

At this point in time the most inspired rock star looks are coming from models like Free and Boche, and like the best rock groups make me look forward to seeing what they’ll do next. 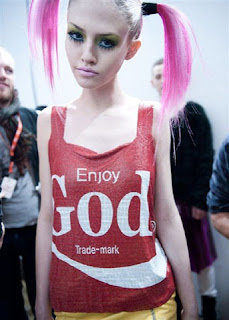