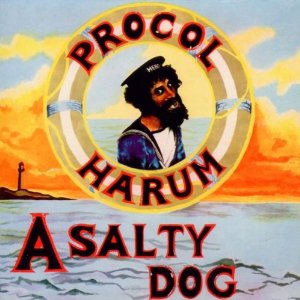 It all happened one beautiful Sunday afternoon in . I walked into the Burberry boutique to view their fiendishly fashionable Prorsum line, and the first thing that hit me was “The Wreck of The Hesperus” by Procol Harum booming over the Burberry speaker system. So sweepingly cinematic, it brilliantly complimented the dramatically beautiful and quintessentially British Burberry fashions in the boutique. Matthew Fisher’s airy vocal melodiously drifted through the room, making us all feel as if we were out to sea, singing the maritime lyrics of Keith Reid:

Majestic English horns blew fanfares while Robin Trower’s guitar conjured an endless seascape as 1,000 strings laid a melodious pattern of sheer ardor. I almost forgot I was supposed to be looking at the new Burberry Prorsum line.

It’s been an eternity since music had the power to transcend its environment, but then again I haven’t owned “A Salty Dog” in years. Although I enjoyed “Shine On Brightly” I forgot how unique “A Salty Dog” was, one of the great albums that never really received the attention it deserved.

Procol Harum released their third album in 1969, an album so eccentric, a much too British maritime-themed album that it turned American listeners away. 1969 was a year for outrageous album covers, i.e. Blind Faith, Trout Mask Replica, and the great Blodwyn Pig cover that still disturbs people, etc. “A Salty Dog” featured a take-off on the Player’s Navy Cut cigarette box; rather than show a respectable English sailor a shaggy gob of indeterminate origin wearing a cap with the name “Herod” stitched on top. That got my five dollars in a flash. I thought it was cooler looking than some ugly naked girl holding a toy plane, really.

Most of the tracks on the album are dirges, the most notable one being the title track, the lyrics articulating feelings of hopelessness on a restless and poorly charted sea. While the keyboards and strings play staccato minor notes, Gary Brooker sings mournfully,

“Across the straits, around the horn: how far can sailors fly?
A twisted path, our tortured course, and no one left alive…”
“We sailed for parts unknown to man, where ships come home to die,
No lofty peak, nor fortress bold, could match our captain’s eye…”

Ironically, while many of the songs allude to distress and despair aboard the ocean blue, the lyrics also define the despair of drug addiction. “The Devil Came From Kansas” reflects these feelings:

“There’s a monkey riding on my back, he’s been there for some time,
He says he knows me very well but he’s no friend of mine…”
“For the turning and the signpost and the road which takes you down,
To that pool inside the forest in whose waters I shall drown…”

While Gary Brooker leads a monkish sounding choir chanting the chorus, Robin Trower’s blistering metal guitar screams over a tattoo of tribal drums, setting this anti-Wizard of Oz fable in a tail-spin with descriptions of “a dark cloud just above us” and “for the sins of those departed and the ones about to go”.

The lost-at-sea analogy as drug damaged casualty is also expressed in the blues dirge of “Crucifiction Lane” (dig the pun):

“Tell the helmsman veer to starboard, bring this ship around to port,
And if the sea was not so salty I could sink instead of walk,
In case of passing strangers who are standing where I fell,
Tell the truth: you never knew me, and in truth it’s just as well”.

In spite of the fact that the tempo to every song is slow like the languid waves of a calm sea (with the exception of “” and “Hesperus”) there is enough sonic seafaring to keep the record from sounding like one monotonous moan. I don’t know why I set this one to the side, but I’m glad it’s back on my deck. And to think, a trip to Burberry Beverly Hills made it all possible. I wonder what they’re playing tonight?

Sitting outside 4 in the morning and this song came in my head from the old good days of my life. Loved this and the album. At one time thought about getting Herod tattooed on my arm but did not happen 71 years old now maybe there is still time to go down with the ship

"The Devil Came From Kansas" conjures up images of John Brown, who sought to lead people to Freedom and Salvation but brought only war, death and suffering on himself and others.