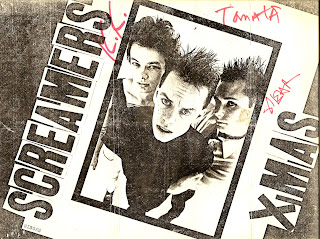 The three most popular bands of the 1977 Hollywood punk scene were The Weirdos, The Dickies, and the band pictured above, The Screamers. They made their debut at the Slash Magazine store front on Pico Boulevard. I remember seeing two sets of keyboards and a drum kit on stage and wondering when the guitarists were going to show up.
The Screamers used to condemn "the tyranny of the guitar" which I always found amusing. The Screamers were led by two scenesters transplanted from Seattle, Tomata Du Plenty and Tommy Gear. Everyone in Hollywood thought The Weirdos were the wildest guys in town until Tomata and Gear showed up and blew everyone away. They had wild songs like "Going Steady With Twiggy" and "Punish Or Be Damned".
I played saxophone with them at The Whisky A Go-Go (1978) when they covered The Germs' "Sex Boy" which they re-titled "Sax Boy" to commemorate my appearance. Darby Crash was honored by their cover and I had a lot of fun performing with them. 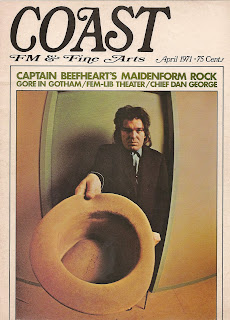 Coast Magazine cover featuring Captain Beefheart. The article covered his historic 1971 national tour, the first full-length one he and The Magic Band embarked on in support of "Lick My Decals Off, Baby". The name scrawled inside his hat says "Tozzi", the Vice Prinicipal he and Frank Zappa had in high school. One suspects the hat was most likely stolen. 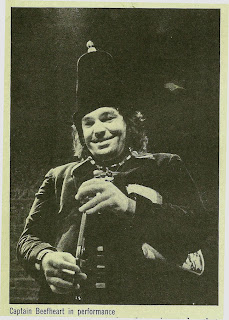 Captain Beefheart on stage wearing the Trout Mask Replica hat. He's in whiteface, a sort of reverse minstrel makeup that recalls the bizarre drag he sported in the gatefold sleeve of "Strictly Personal". 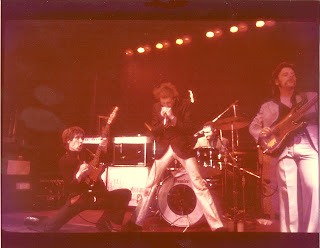 Dr. Feelgood on stage at The Starwood during their "Malpractice" tour (1976). A very exciting stage show and the pub band most likely to succeed for their cinematic hit man looks and Wilko Johnson's exciting jagged guitar playing. They're probably playing "Going Back Home" or "Roxette" in this picture.

Pictured below is a flyer for The Mentors, a terrible band but very funny. I like the line in the flyer that prohibits crybabies and bellyachers from attending their show (good advice). The proviso "no faggots allowed" should be taken with a grain of salt given that Mentors band leader El Duce aka Eldon (RIP) got his start playing drums in Seattle with The Tupperwares, a band led by, yup, Tomata and Gear before they became The Screamers. It's a small, gay world after all. 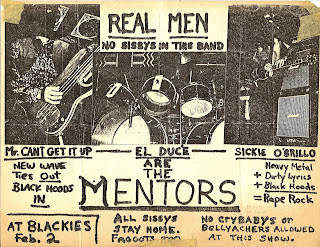