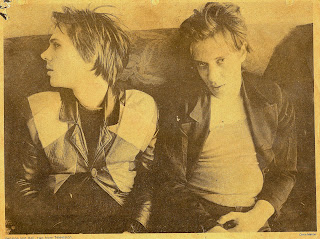 As far as I'm concerned punk rock started with this Craig Godlis photograph published in Andy Warhol's Interview in 1975 depicting Television collaborators Tom Verlaine and Richard Hell in their most raggedly ragged ramshackle glory. Their music fell short of their wild looks but this photo pretty much lit the fuse to what was to be The Sex Pistols look and what eventually would become "punk fashion".

Here's an ad for The Mercer Arts Center from The Village Voice during the summer of 1972. If you look down at The Oscar Wilde Room you'll notice a bill for "The Dolls of N.Y." (!). It doesn't mention the other acts performing like Suicide, KISS, Queen Elizabeth featuring Wayne County or The Stilettos (Deborah Harry), among others.
I didn't catch the blurb for the Dolls so I missed them (sorry), but I did catch the Off-Broadway production of "One Flew Over The Cukoo's Nest" (predating the movie, BTW) which was very good featuring Lane Smith in the role of Randall McMurphy. Lane Smith later played Perry White on the ABC-TV show "Lois and Clark". 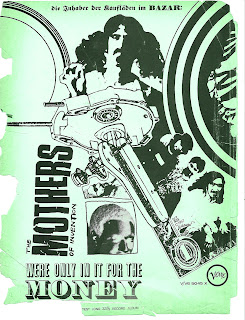 In the late 1960's Frank Zappa extensively advertised Mothers of Invention albums in Marvel Comics. This great ad designed by Cal Schenkel was on the inner cover of a giant-sized Spider Man Special comic. 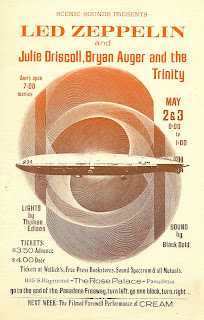 Here's an ad for Led Zeppelin playing The Rose Palace in Pasadena, California with Julie Driscoll, Brian Auger & The Trinity opening. The cost of a ticket was only $4 back then. Those were the days.


Pictured below is a press photograph of Sparks seen performing on "American Bandstand" around the era of "A Woofer In Tweeter's Clothing" (1973). While I'm not the world's most foremost authority on all things Sparks-related they're probably doing "Wonder Girl" or "Girl From Germany". Notice the cartoon sledgehammer Russell Mael is sporting. 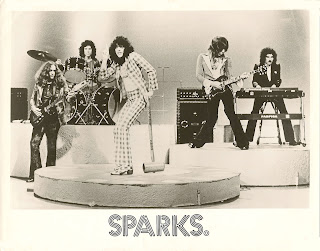