The Brotherhood of The Horn 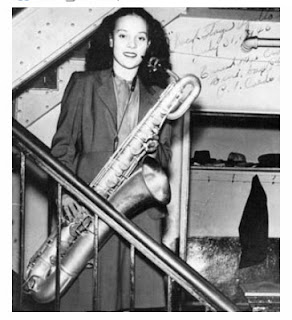 It was 1972 and I had $185 left in my Bar Mitzvah fund. I was taking flute lessons at Siegel’s Music and on the way out of the store after a lesson it stood in the shop window staring me down: a Conn Mark IV Tenor Saxophone, silver plated and so small for a tenor it was mistaken for a C-Melody saxophone. It was from the 1920’s and in pretty good condition. It had a naked girl with long, sexy platinum hair and a killer pair of titties etched into the bell of the horn. I ignored her beckoning towards me for the next two weeks.

I tried to forget about her lying in my bedroom listening to Captain Beefheart, Blodwyn Pig, the Bonzo Dog Band, and The Mothers of Invention, all showcasing demented psych-jazz saxophone playing. I finally said, “fuck it”, went to Crocker Bank, closed my account and walked one block down to Siegel’s Music and bought my horn. But it wasn’t just a horn, it was buying a new life, newer than I ever imagined.

My flute teacher Jerry Myers was thrilled to hear I got the horn. “Now you’re going to be playing the real stuff, Andrew”, he said as he began drawing up saxophone exercises for me to practice. One of the first things I did was play my sax alongside Jimi Hendrix records hoping to replicate distorted guitar sounds. I also remember playing along to T. Rex records, wearing out my copy of “Electric Warrior” playing lead sax to “Jeepster” and “Rip Off”.

As soon as people found out I could play saxophone invitations were extended for jam sessions; after all, who needs yet another guitar player or singer? People always need a sax player. Within weeks I was skronking and skreeking at downtown loft parties, all the booze you can drink, Yes! I played New Year’s Eve with my brother Marc Anthony Thompson backing up some wild rock band at The Blind Pig. Have horn will party :).

Beyond the loft party sax tramp shenanigans Jerry Myers taught me about the whole old school jazz fetishisms, as in watching him rehearsing with a big band at The Musician’s Union on Vine Street. Big bands generally suck but once you’re sitting in front of a wall of saxophones, trumpets and trombones, the sheer power of these winds will blast your ass into the stratosphere. Even a hoary (whore-y?) old chestnut like “Signed Sealed, Delivered” sounds strong enough to make you see the Saints. 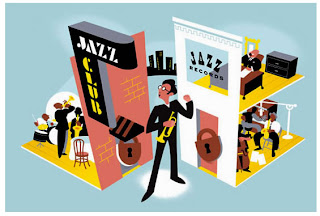 Across the street from the Union building was M.K. Stein, which sold every type of brass and wind instruments, cases and horns and instructional books, etc. The walls were jammed with yellowing framed photos of jazz recording stars whom played up the street at The Vine Street Grill, Shelley’s Manne Hole, The Hollywood Palladium (home of big band leader Guy Lombardo) and the CBS radio station on Sunset & Gower. I bought a leather saxophone gig bag at M.K. Stein after I found a $100 bill in my back yard – I lived next door to a massage parlor and when I took out the trash on a rainy night I saw a bill on the ground, grabbed it and ran up the stairs.

The best sax repair man in Hollywood was right around the corner, a guy named Mac who had a big speed boat in his driveway which you walked past to get to a little garage in the back. Inside the garage were hundreds of horns in various states of disrepair with pads and keys being replaced or overhauled. Jazz music was always blaring out of a tinny cassette player and “Mac” in his skipper cap would calmly tell you your horn would be ready in a few days. And it would sound better than you ever imagined it could sound once you picked it up.

The wild thing about this sonic education is that one ear was listening to glitter rock and the other one was discovering jazz. In between the Sweet, Roxy Music and Queen shows I’d go to Shelley’s Manne Hole to see Charles Mingus and Gato Barbieri and Donte’s in the Valley to see Stan Getz and Art Pepper.

My time to groove in the Big Band Mode came when Jerry taught a big band class at Los Angeles City College (which has an awesome music curriculum, by the way). “Pick your horn, Andrew, don’t be shy”. I wasn’t. I picked up a baritone saxophone, huge and heavy, so large I had to place it on a stand, lest I dislocate my neck.

We played another Stevie Wonder classic, “For Once In My Life”, and the vibrations shaking from the resonating horn boomed across the room. I was bringing down the bottom, electricity flowing through me, from my cerebellum through the reeds, down the curved horn and out of the bell of the horn.

The next week I walked to The Donut Show at Toluca Mart on Pico & Robertson and the crazy bastard Morey Branovan with this thick sunglasses and Hawaiian leis around his neck braying “Hatikvah” on his alto sax like some hebe Roland Kirk echoing down the intersection providing Jewish nightmare music. I picked up some chocolate buttermilk donuts realizing I could play better than this untalented dinosaur.

Walking down Pico Boulevard I started picking up jazz 78’s from the Hadassah Thrift Shop. My favorite was “I Cried For You” by Dinah Washington with that wild, swinging Ben Webster tenor solo. You could also buy 78’s in great condition at Music Man Murray in the red light district of East Hollywood, records like vintage Charlie Christian sides complete with the album cover (opening up like a photo album). I’d alternate playing my scratchy 78’s with “Nothing Is” by Sun Ra, “Volunteered Slavery” by Roland Kirk and “Science Fiction” by Ornette Coleman. Music would never be the same again and my life would never be the same again.

Have horn will travel, like your choice of instrument. Your writing makes everything sound like an adventure.