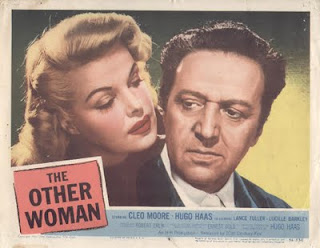 Before the advent of cable TV, satellite TV and any other form of video entertainment the only way you could catch low-budget B-films and other cinematic obscurities was on The Late, Late Show, usually accessed on a local television channel every night after 2 am. It was a filmic No Man's Land of weird comedies, poorly dubbed foreign films (gladiators are standing by), and ultra-low budget noir movies. This is the universe that Actor-Producer-Director Hugo Haas inhabited.

Hugo Haas, Czech exile from the Nazi menace that destroyed Europe, came to the United States in 1940 playing Slavic Counts, Professors, Concert Pianists and even sidekicks in adventure films like "The Fighting Kentuckian" and "The Princess and The Pirate". By 1950 he turned to producing and directing a string of noir vehicles usually starring himself and boxy battleship blonde Cleo Moore.

While some people have quipped that "Once you've seen one Hugo Haas film, you've seen them all", I think they're being a little too harsh on the guy. I will say this, if you like James M. Cain's "Postman Always Rings Twice" you know the triad. Haas is the nice Slavic gas station/cafe owner/working stiff married to the conniving cheap blonde dying to bust out of her dreary surroundings (Cleo), and the hot young stud with the monkey wrench in his mitt aimed at the back of Haas' skull (a revolving cast of studs: John Agar, Vince Edwards, etc.). Haas riffs on "Postman Always Rings Twice" with enough clever variations so you don't mind the redundancy. Besides, in two films the wife is played by Beverly Michaels, no slouch in the golddigger department. 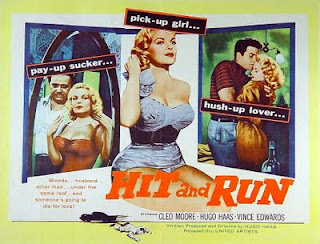 While I haven't seen every Haas movie ever made, the following is a list of the ones I have, most of them recommended:

Hit And Run (1957): Hugo runs a creepy auto-salvage yard symbolizing his ramshackle existence in a new country he's too unhip to fit into, meets cheap showgirl Cleo Moore who sizes up his assets and marries him. Vince Edwards recalls his role as the philandering hipster creep from "The Killing" by scheming with Haas' wife Cleo Moore in killing hubby (Hugo). They run him over on a darkened road, but to their horror receive a visit from Haas' twin brother...or is he??? Dolores Reed stops the show as a lusty lion tamer.

Strange Fascination (1952): Pretty dull affair where Haas plays a concert pianist who chases after a nightclub dancer (Cleo), one of the thickest I've seen since The Velvet Hammer in their heyday. The sets are over dressed and there isn't enough tension to make this a noir. It's more like a bad melodrama than anything.

One Girl's Confession (1953): The only Haas movie available on DVD and for good reason; it's the best Cleo performance I've seen. She plays a waterfront waitress who embezzles a big bundle from her father's ex-partner and hides the swag in the woods. Once she's freed from prison she gets a job working for hard-drinking and harder-gambling Hugo at his cafe. Sending him out to get her loot after losing his ass at cards, she assumes he ran off with her money and kills him. This movie has some dream-like images regarding redemption employing images of a Nun's Orphanage and the Pacific Ocean.

Bait (1954): This one is so Z-budget it looks like a Shemp-period Three Stooges short. Too bad it also has John Agar, Cedric Hardwicke(!) and Bruno Vesoto in it. There's a lot of hurly burly going on about gold mines, prospecting in the desert and Cleo being used as bait to exploit Agar. Slow and one-dimensional.

Pickup (1951): Haas is a station agent for the railroads and bags cheap Beverly Michaels who thinks he's got a fortune stashed away in the desert. Alan Nixon is his young assistant and Michaels races after him for some lust and larceny, plotting on the killing of Haas, discussing it out loud in front of him because he's lost his hearing with the most intense case of tinnitus in the history of the cinema. The movie also has a beatnik hobo buddy called The Professor. This is one of Hugo's best and reminded me a lot of pulpy Jim Thompson novels.

After his string of noir classics he made "Lizzie", a "Three Faces of Eve" type multiple-disorder movie, a detention girl film (1959) and three years later made his last film which starred Marie Windsor, Chester Conklin, Corrine Griffiths and a few other silent film stars.

While his movies weren't the kind to compete with Billy Wilder or Robert Siodmak noirs, there's an awesome dime-store crime novel vibe to all his films that makes them irresistable. Haas films are fun no matter how sleazy and its high time for a serious revival of these back door Late, Late, Late Show classics. 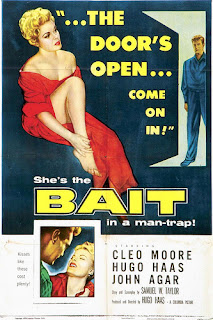