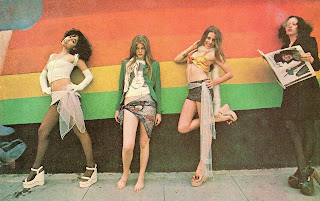 The groupie phenomenon was still going strong in the 1970's, still colorful because the glitter rock scene gave it a strong fashion base to work with. No offense to the girls pictured above but I only recognize the first girl (Lori Mattix) and the third girl (don't know her name) from the Rodney's English Disco days. The other two don't look familiar at all. Maybe the other two spent more time at The Continental Hyatt House on Sunset Blvd. where all the big budget hyped bands (Led Zeppelin/Roxy Music/The Kinks) stayed. The bands that didn't get a big promo push (The Stooges/Suzi Quatro) stayed at The Tropicana on Santa Monica Blvd. in West Hollywood. 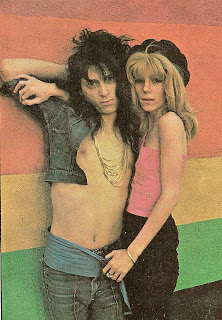 Johnny Thunders' #1 girlfriend from Hollywood was Sable Starr. She was very cool and seemed pretty loyal to him at the time (1974). They got a lot of publicity together. David Johansen's girlfriend was Cyrinda Foxe, another colorful blonde. Leee (three e's) Black Childers used to photograph them quite a bit for Rock Scene Magazine and Andy Warhol's Interview Magazine. 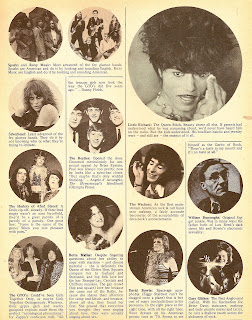 Here's the glam spread for Creem Magazine: click on the image to see it closer. This was a four page report, but on this page you'll see Sparks, Roxy Music, Little Richard, Michael Des Barres, Bette Midler, Gary Glitter, David Bowie, The GTO's (last month's blog!), The Wackers, The Harlots of 42nd Street, William S. Burroughs, and four guys from England who look like Ted Koppel. 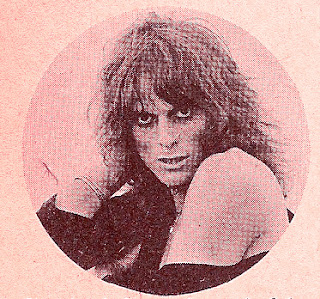 I remember seeing Silverhead at The Starwood in 1974. The singer was Michael Des Barres, a very attractive Nordic looking model-type. His band got a lot of flack for their album cover, "16 and Savaged". They were okay, nothing special. Mr. Des Barres married Miss Pamela from The GTO's, later joined Power Station, and then embarked on a great acting career, starring as a villain on "Melrose Place" and appearing in cool movies like "Sugar Town" and "Mulholland Drive". 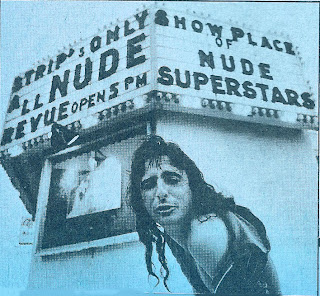 Alice Cooper did a fabulous photo spread in Creem Magazine touring all the hot spots of Hollywood. Here he is pictured in front of The Classic Cat on the Sunset Strip, which was formerly Jerry Lewis' club which he opened to compete with his former partner Dean Martin who had the more successful Dino's Lodge. The Classic Cat later became a Tower Records Video Store. Not much to say about Alice Cooper, other than his best work was about to be behind him, just like this marquee. 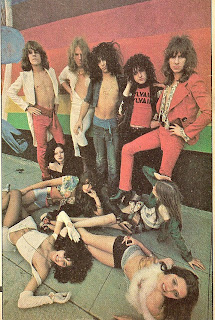 I remember when The Dolls played a top-secret show at Rodney's English Disco: first Jerry Nolan came in and was very down-to-earth, no rock star attitude at all. Great guy. A half-hour later Arthur "Killer" Kane came in with his people and damn, he was tall. Sylvain Sylvain (Isaac Mizrahi's cousin!) came in a little bit later and giggled a lot. BUT - BUT - When *** Johnny *** came in all the groupies standing around the club dropped everything, stopped talking among themselves and primped like crazy as soon as they saw him. You could have heard a pin drop. He was clearly the star of the band.
Posted by Andy 7 at 5:00 AM

I love this era. What hotel was your fave couldn't be the Hyatt House. You seem more downtown under ground.
Great Blog!