Stuff I Burned From TCM, Part 8 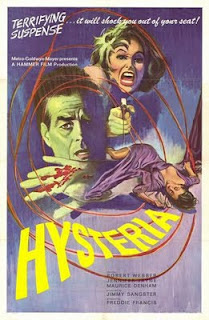 It’s funny and crazy and even wonderful that two films I originally planned for this blog, Jacques Demy’s “Model Shop” and William Castle’s “Zotz!” have been released within the past few weeks. I recommend you rent them both, they’re just great. Nevertheless there are still a few classics that need to be released just as quickly as those two, and here they are:

Dangerous Mission (1954): Horace McCoy and W.R. Burnett co-wrote this Technicolor noir about a woman (Piper Laurie) running off to Glacier National Park in Montana after witnessing a gangland murder in Manhattan . Vincent Price plays a hit man hired to murder her while he’s dating her, only Victor Mature throws the monkey wrench into the works by barging in on them with his greasy charm. The breathtaking location photography is reminiscent of “ Niagara ” making the action secondary to the beautiful location. Irwin Allen produced this film in the early Fifties and already had an eye for disaster, throwing a forest fire and not one, but two avalanches into the movie.

Hysteria (1965): After being discharged from the psychiatric ward Robert Webber moves into an apartment where he hears a woman next door being knifed to death every night. The only problem is he's the only tenant on his floor. After doing a bit of research on the murder of his former neighbor he discovers she's a fashion model who's disappeared. His psychosis returns when he keeps seeing her appear on the street, and even has cocktails with her. The dead fashion model is played by Lelia Gordoni, who achieved movie infamy as the half-cast girl in John Cassavetes' film "Shadows". Another nutty Freddie Francis thriller, and one you shouldn't miss.

The Good Humor Man (1950): Jack Carson was always swell at comedy relief in movies like "Million Dollar Mermaid" and "Blues In The Night", but here he's taking center stage in a Jerry Lewis-styled slapstick romp that's very funny, playing your friendly neighborhood ice cream truck salesman. He finds himself implicated in dead blondes (Lola Albright) and shady crooks, and his rival for his love interest is none other than George "Superman" Reeves. Carson's very funny in this, and it's a shame he didn't do more silly comedies like this.

The Mind Reader (1933): Warren William plays a carnival mind reader who tries to go straight to win over Constance Cummings' affections, only he's at his coolest when he does the whole fake swami bit. Lots of creepy camera angles in this, and William is excellent, easily the best actor Warner's had before Cagney, Bogart and Robinson moved in. If you like creepy carnival movies this one will thrill you. Bogart's first wife Mayo Methot turns in an amazing three-minute suicide scene that'll chill your blood.

The Love-Ins (1967): Laughable psychedelic corn about a Timothy Leary type who becomes a sort of psych Mussolini, a little more convincing than Max Frost in "Wild In The Streets", but not by too much. There's a great scene where the Big Guru appears on "The Joe Pyne Show", a sort of Wally George of the Sixties. There's also a freak-out Alice In Wonderland naked go-go dance scene from Susan Oliver that she'd probably like to forget. Also starring James McArthur (Hawaii Five-O) who attempts to assassinate the Guru and Mark Goddard (Lost In Space) as a misguided follower.

Well, that's it for now. I think I'll have some more gems planned for the next TCM jamboree blog. There's no shortage of unreleased classics waiting to be discovered. By the way, Turner Classic Movies is still the greatest station around and always find new stuff to screen all the time. They're finally showing "Performance" on TV, forty years after its release. Can "A Clockwork Orange" be far behind?
Posted by Andy 7 at 9:30 AM