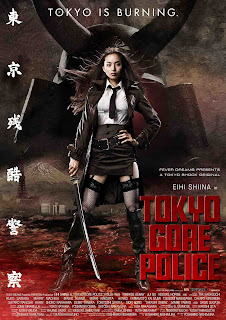 I'm not a big fan of Christmas gift guides any more than the next guy but I have a feeling this one will be fun because my suggestions may be a little off the beaten path. I'm just going to throw a few ideas your way in case you hit a hole in the road and ran out of some great gift ideas.

Lately I've been getting into the whole Japanese "pinky violence" genre of films where the violence is so outrageously stupid you can't help but laugh at the gushers of blood spraying out of every hole in somebody's body, and what better DVD to start off with than "Tokyo Gore Police" with killer hookers that have samurai swords for legs? It's like a Paul Verhoeven samurai film, and if that concept doesn't make you drool then you're reading the wrong blog. Once you've seen that masterpiece of plasma porn check out "The Machine Girl", no less over the top and demented.

Some aging idiot I ran into at a party whined about how music isn't good anymore. Obviously he didn't get "Winchester Mystery House" by The Hex Dispensers, "Form Follows Function" by The Hentchmen, "2" by Darker My Love or anything by Les Breastfeeders, those psychotic Montrealers. CDs are cheaper than ever now that they have to compete with nickel-and-dime downloads.

Books are more fun to read than ever, too, whether it's wild fiction like "Skunk" by Jason Courter, "Hex" by Maggie Estep, or "Freezer Burn" by the always dependable Joe Lansdale. If they like comics get them all five volumes of the Harvey Comics archives, each volume featuring a different character, like Richie Rich, Casper, and the terminally bratty lil' devil Hot Stuff. If your giftee has slightly older tastes buy them every compilation volume from "100 Bullets" now that the series wrapped last Autumn.

If your giftee isn't a culture vulture get them a belt buckle from Heavy Metal Belt Buckles http://heavymetalbuckles.com/index.html. Not only are the buckles crazy as hell but some have built-in booze flasks, a real penny-saver if you frequent those damn expensive $15 a beer night clubs. Some also have built-in iPod holders so if the intermission music at the club sucks you can plug in and listen to The Hex Dispensers or The Hentchmen. Yeah!

Men are going back to wearing bracelets, believe it or not. You don't have to be a smelly Israeli stereo salesman to wear a nice dressy bracelet anymore, guys. An average bracelet will set you back $15-20 and Overstock.com http://www.overstock.com/Jewelry-Watches/Mens-Bracelets/17505/subcat.html has even lower prices on them with a great selection. Stainless steel with black rubber is the big look these days.

One thing chicks love it's shoes, and the coolest shoemaker on the planet these days for men and women is John Fluevog (www.fluevog.com). He designs some sweet fuckin' kicks that sport a kind of glam meets psychedelic rock look and they're not too pricey, either. They're well made, comfortable, and Fluevog swears they're made by angels. All 8-year old kids from Ecuador look like angels, so he's not really lying.

But if doing a good deed is your idea of a swell holiday gift, buy your giftee a membership with an organization that could use the support; in my area it would be The American Cinematheque (http://www.americancinematheque.com), the Petersen Auto Museum (http://www.petersen.org), or even the Los Angeles County Museum of Art (http://www.lacma.org). You'll be making a nice gesture for these cool organizations and your giftee will benefit from it as well with free tickets and awesome souvenirs. And if all my suggestions suck, just buy them a tattoo.