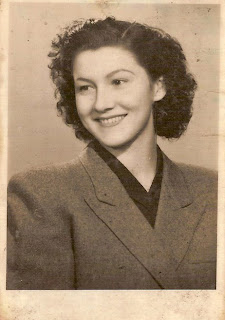 My mother’s birthday was two weeks ago, I was going to write something about her but I ran dry and wrote something else instead. I don’t even remember what it was, maybe some essay on chimps and why little boys like to laugh at them. Something like that. Well, Mother’s Day is here so I’m going to give it another go.

My mother (Elizabeth) was a very striking brunette, tall, thin and very pretty, kind of a Sophia Loren look; my father (Ernest) was good looking, too, he reminded me of Desi Arnaz. Watching TV was fun because my parents looked like the characters on TV shows, only better looking.
My mother had very arched eyebrows and always looked at me with a look of amusement, as if her face said, “Okay, what’s this kid going to do now?” A lot of parents like to brag about how bright their kids are - my mother would just sit there and trip out on how nutty her new born son was. I made her smile and laugh a lot.

She had a great laugh and a great smile. I liked the way she listened to rock ‘n roll, not like most parents my classmates had, who wouldn’t allow them to listen to rock or read comic books. One of them didn’t even allow my friend to watch television! My parents were cool; they were pretty open-minded. Except for old people.
My mom HATED old people. It was funny to watch. Once an old lady got on the bus she moved towards the back, harrumphing and staring at me sitting in my seat. My mother held my hand tightly and muttered through gritted teeth, “Don’t you dare get up and give her your seat”. In Hungarian, of course, so the graybones couldn’t hear.

And when we moved to Hollywood from New England my mom carted us around all the Hebrew schools in the area, looking for a good one. I remember this school we visited that had the playground on the rooftop with a low fence. Upon seeing this mother’s pointy eyebrow shot up with withering disdain. I didn’t miss that for a second. Five minutes later in the principal’s office a boy raced in harried, screaming, “Rabbi, Rabbi, the toilet’s flooding in the Boy’s Room”. The pointy eyebrow raised disdainfully again. Once again, my mother hmmphed and growled, “We are NOT going to THIS SCHOOL. Come, children!”

But she wasn’t always a bitch. She babysitted kids on the side that would have tested the patience of a saint. She was always nice to them, no matter how irritating these tots were. Of course, once they left the house she would do hysterical imitations of them whining and pissing all over themselves.

My parents were the most exciting couple to me: My father would come home with blueprints of missiles and rockets he designed at Aerospace during the Kennedy/Johnson-era Space Program. My mother had sewing machines, tailor’s forms and tons of material, pattern paper and designing gear to work with. I knew more about seam rippers, bobbins, and pattern wheels than I did about baseball or dirt bikes. I developed a fetish for machinery and design at an early age.

I remember going to textile stores with her and she’d say, “Okay, Andy, if you see a shirt pattern you like, pick it out”. I’d go through all the pattern books and find a cool Nehru shirt design (psych era, don’t laugh!). Then we’d walk around and look at the different material and I’d pick the most psychedelic, colorful print, and say, “That’s it, Mommy”.
We’d go home and she’d sew the cool shirt for me, and my brothers would razz me about it. They were jealous.

We’d also go for long walks in Beverly Hills and go for miles up Olympic Boulevard until we reached the deepest excavation site with dozens of bulldozers roaring around. There was a big sign in front: “Coming soon – Century City, a new experience in city living and entertainment”. Hah!

The walks around Beverly Hills went from sunny to dark when my mother contracted cancer and I’d walk with her to the Doctor’s office on Wilshire and Roxbury. I’d sit in the waiting room with my comics until she came out from her treatments. She smoked quite a bit, so much so she sewed a cigarette case cover for her Kents.

I was thirteen when she died, it was in the peak of the summer. I remember her funeral was sunny and hot – the sun was blinding and everyone was dressed in black. The contrasts were very extreme. I was in shock and felt as if the floor was pulled out from under me. The shock was so intense I couldn’t even cry.

To this day I still visit the same grave, almost forty years later. I’m sure if she could see me now I still make her smile and laugh a lot. 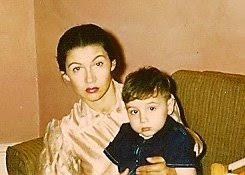 That is the most touching tribute I ever read. It's perfect.

This is a wonderful essay. It's touching and hilarious. Plus your mom is way hot!

Loved this tribute! I cried reading about your mom dying.