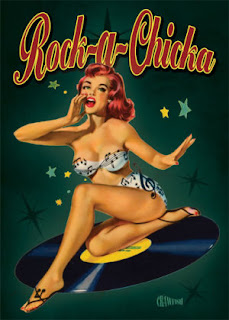 If rock ‘n roll wants to enter the mainstream and be taken seriously as an art form, then fine, but you have to bear in mind that once that happens things like awards, tuxedos and banquets arise from that serious mess. The Rock & Roll Hall of Fame is a fine example of what happens to trashy entertainment that decides it’s heavy business.

The Rock & Roll Hall of Fame (televised on VH1) is a train wreck, a plane wreck, and a car wreck complete with flying roadkill. Every culture hero you looked up to in the past will eventually show up at these ceremonies and show how drained they are of any significance whatsoever.

While it was heartening to watch John Fogerty aka Grampa Feedback introduce the Ventures, things later ground to a dead halt when bitter Lou Reed showed up to introduce awardee Leonard Cohen. For a man who insists on being taken seriously as a songwriter, Reed shows little respect for anyone else’s work. He read Cohen’s lyrics with very little expression or verve. Cohen’s speech wasn’t terribly funny, but considering how grim his songs are that came as no surprise. Rather than perform his own songs, some Starbucks minstrel covered a Cohen tune instead.

John Mellencamp, the awardee with the most unmemorable name that night, looked like Tweedledee the carnival midget sporting an Elvis pompadour toupee. His speech was interminable and was followed by an equally interminable medley of his Eighties trailer park anthems. I think I would rather serve a year in prison under solitary confinement than take orders from him in a band. He looked very angry and full of his tiny self.

Sucking up more schedule time was Madonna, who accepted her award quoting Kabbalah and other cosmic crap, and her speech lasted so long it felt like a college lecture. Instead of doing her customary Broadway hooker schtick Iggy & the Stooges covered “Burning Up”, Iggy coming off like Kevin Bacon playing the Flying Dutchman. When the bass guitarist proudly kicked his leg up in the air I could feel the air whistling out of this shit soufflé. Soon drummer Scott Asheton fell apart in the middle of the song, so Ron Asheton busted into a noise-jazz guitar solo that ruined an already awful song.

The worst was saved for last: Tom Hanks came aboard (Madonna, Mellencamp, Tom Hanks, it was so fucking Eighties I had the puke chills) and gave a long, unfunny Baby Boomer account of discovering the British Invasion to introduce the mediocre racket that was the Dave Clark Five. Super-creep Dave Clark accepted his award looking every bit as sinister as his reputation. He had the most satanically arched eyebrows I’ve ever seen, arched so high Anton Szandor LaVey would spin in his grave in Hell out of jealousy. Actually, Clark looked like a marionette that’s been melted and then thrown in the spin-dry cycle for three days. Singer-songwriter Mike Smith died a week before the awards ceremony, and if it wasn’t for Smith old DC would be picking up litter in Hyde Park.

If this nightmarish puppet show is the bottom line when it comes to giving rock music the respect it thinks it deserves, then some art forms should remain misunderstood. Sometimes "understanding" creates soul-crushing compromise, so keep the mystery alive.