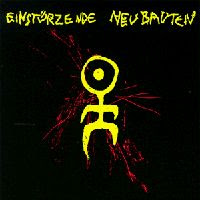 The hottest punk band from Germany in the early Eighties was called MDK (Mechanik Destruktiv Kommando) and they had a great song called “Werewolf” and they had a blazin’ skronk sax player. I saw them play at a cool gay bar in Echo Park, when such things were done, called the Other Side. I thought they were wicked.

MDK disappeared and the next big thing from Germany was an industrial band that combined no-wave anti melodies with power tools blasting in the background for percussive and extra sonic dissonance. The band looked like lager-gutted construction workers named Horst and were fronted by an emaciated jumbo haired glam-fop junkie creep named Blixa Bargeld. They were called Einsturzende Neubauten. Translated in English it’s “Collapsing New Buildings”. Scheiss!

I heard they were the opening act for a bogus glam act from England called the Specimen at a forthcoming show in Pasadena at an old-time theatre called Perkins Palace. I wanted to see the boys from Berlin but didn’t have any interest of sitting through a clownish drag-pop joke like Specimen. What would you do?

Half a day later I got a call from Ella, my platonic girlfriend. We met at the Dick Grove School of Music in North Hollywood, a jazz music school where we shared classes in Music Theory and Harmony (Harmony is the science of building chords, Theory is basically the study of everything else). We tried to make a go of being lover boy and girl but it didn’t work out. When we kissed she had the coldest lips of any girl I’ve ever kissed, and she even smelled like an aquarium. When she told me her sign was Pisces the Fish I wasn’t surprised.

When she was in Europe she met Neubauten and got to be chummy with them, so on the day of the show she got a frantic phone call from them, asking her in their 1st grade Englisch if she had a chainsaw they could borrow. Ella said her Daddy had a well-stocked tool shed, but needed a hot thug to carry the Makita for her. “Do you want to go to the show with me? We’ll get in for free”, she said.

3 hours later: We got out of Ella’s car with her carrying little V8 tomato juice style canisters of petrol while I carried the heavy chainsaw that didn’t have a case nor a blanket around it. As we made our way past the goth crowd standing in line waiting to get in I glanced over and saw the most terrified vampire kids I’ve ever seen. Haven’t they ever seen a 6 foot tall hot thug carrying an enormous chainsaw in the middle of Old Town Pasadena in the dead of night before? Poseurs!

We walked up to the backstage door and saw an even more nervous bouncer in front.
“Whoa, whoa, whoa, where do you think you’re going with that thing?” the bouncer barked.
“The band requested a chainsaw for their show”, Ella responded.
“No way. Is this a joke?”
“No, we’re on the list. This thing’s pretty heavy. Could you get somebody in the band to pick this up right now?”
The bouncer called for another guy. “Hey, Smitty!”
Smitty walked over and did a horrified double-take at the ominous tool in my hands. “What the fuck is that?”
“They say the band requested the chainsaw for their show?”
“Uh…are we insured for this?”
“Fuck, I don’t know…get those Germans”, he yelled. A minute went by and there was nervous silence. “Do these guys play music?”
“Yeah”, I quipped, “but they might build a table by the end of the show”.
The bouncer gave a sarcastic, nervous laugh. Three minutes later and 2 perky guys from the band showed up.
“Ella, Ja, you brought der tools!” they laughed. “Gut! You are die freundlich gut!” they grabbed the chainsaw from my aching arms.

Showtime: The band took the stage and while guitars and basses were howling other guys from Neubauten were manning noisy power drills and circular saws with sparks flying all over the stage. For their (what ended up being their) last number, the chainsaw finally got pulled out and growled all through the next noise-fest. The fans were on their feet and tearing their poorly dyed hair out and screaming. Finally a fire broke out on stage and the band’s amps and mikes got turned off and the curtain closed on them. Everybody went crazy. Specimen were fucked; they couldn’t follow this – nobody could! And I was a part of musical history…AGAIN. 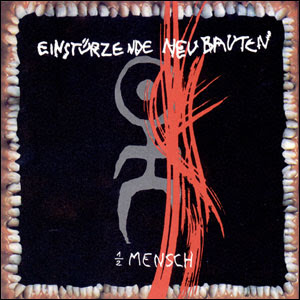 Not my style of muzak but I wish I was there...