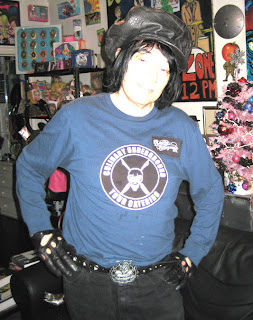 I confounded my old man's expectations when I blew off college and decided to go to work full time. Since I had low self-esteem, instead of getting an administrative clerk's position which I would have excelled at, I went for something low and menial. I got a job as a delivery boy.
I had a halfway decent car that could get me around, so I applied for the nearest business in the neighborhood. It was a kosher butcher shop, Zimmerman's Meats, run by Morty Zimmerman, a gaunt man with a pot belly and a mustache that looked Hitlerian. His behavior was fairly Hitlerian, but I needed money, bad.
Zimmerman was cranky and acted like he was always on the rag, and looked it too with his bloody butcher's smock.
"Sevrin!" he yelled at me. "Mrs. Scheinblum of Cashio Street ordered five pounds of brisket. Here's twenty dollars and make sure you get exact change. Did you hear me, Sevrin?"
"I'm on my way!" I grabbed the twenty and the pink wrapping paper of five pounds brisket.
Twenty minutes later I came back with exact change for Zimmerman. Zimmerman was chopping wings off chicken bodies, and stopped to look at me. The first thing that came out of his mouth was, "Nu, how much did she tip you?"
"She tipped me fifty cents", which was normal back then. A pound of meat was only two dollars fifty cents.
"That cheap son of a bitch!" he yelled. "Only fifty cents. God damn it!"

Zimmerman was punk rock before there was punk rock. He showed me the ropes at depositing the store take for the week by walking with me to the bank across the street. Zimmerman didn't give two shits about propriety, he kept his bloody apron on. There we were in line, me frightened young yid-mod alongside Jewish hitler moustache with a bloody apron stinking of dead flesh, the customers moving far away from us in line. Zimmerman was oblivious to his effect on the crowd.
"Now listen, if they offer you a glass tea with cookies you tell them Mister Zimmerman has more meat you HAVE to deliver", he hissed so loudly you could hear him in Calabassas. "Take the money and get the fuck out", his voice rising with Semitic rage, people parting away from us even more.
I was disgusted by him, but then I lifted my arm and realized I had dead cattle and chicken stink on me, too. We both had the stink! I looked down at my shoes and noticed the reddish-brown hue of dried blood, too.
"Look, Sevrin", he went back to hissing, "The next assignment when we get back I have for you is you're going to hose the floor and I want you to sponge the freezer, then we have to prepare for the Shabbos rush!"
The teller waved us over with a terrified look on his face and took the cash. I think I worked for Zimmerman for two months and finally I got tired of taking scalding showers that barely got the bleeding meat smell off me. Zimmerman hated paying me anyway, I think that's why he threw a pisspot tantrum over my tips. I don't think he missed me and I KNOW I didn't miss him.
Posted by Andy 7 at 7:42 PM