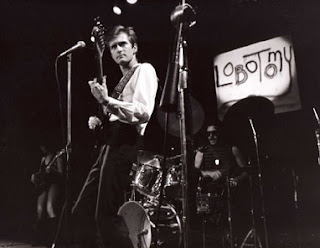 Well, it seems like 100 years ago, but I’ll try to remember. I was putting together a show at Mabuhay Gardens in San Francisco and I needed to talk to the Berlin Brats. I didn’t have anyone’s number but they were playing the Whisky A Go-Go on a Tuesday night. As I walked into the club I heard what was the most incendiary guitar playing I’ve ever heard, abrasive acidic tones with the most fluid lines ripping out of a small Fender Twin-Reverb amplifier.

Looking up, I saw the strangest trio on the elevated stage. The bass guitarist looked like a Chinese-American Ronnie Spector, and the drummer looked very wholesome, a Shakey’s pizza delivery boy who just stopped by to play drums; he really, really liked his roto-toms. He had many of them set up and used them quite a bit. The guitarist looked like an emaciated Martin Sheen, and when he opened his mouth to sing he had the voice of a pissed-off Popeye. He sounded exactly like Popeye. The band was called The Alleycats.

I quickly forgot about the Berlin Brats and gave these guys my total attention. I liked the way they didn’t acknowledge current musical styles yet exuded it completely. The true sign of cool is when you exude your own style without being a slave to whatever’s current or mandatory. They had it. At the end of their set they handed out flyers to their next show, the Fleetwood in Long Beach.

I went to the Fleetwood the following week and missed their set. I saw Randy, the guitarist and his bassist Diane in the parking lot. They stood in front of their 1970 Chevy Suburban talking to some fans. The first thing that struck me about them both is that off the elevated stage they were incredibly short, at least 5’2” both of them.

“Hey”, I said, “You guys are The Alleycats. I saw you play the Whisky in Hollywood. Great show! What time are you guys going on?”

Randy’s eyes got really big, “Oh, we already played, you missed us”, he said in his Popeye voice.
“That’s a drag”, Diane said with a cigarette in her hand. She reached in the trunk of the car and pulled out a box of Vanilla Wafers. “Want some Vanilla Wafers?”
“Diane, do we still have coffee? Get the thermos, I want some coffee”.
While Diane was hunting for the thermos with the cigarette now hanging from her lips, I told Randy, “Hey, do you guys play Hollywood much?”
“No, that was a last minute thing, we don’t get too many jobs down there”.
“Well, I’ve been getting some shows together at the Masque, this punk rock club in Hollywood. I’ll bet you guys would go over great there”.
“Do we have to do a lot of covers?” Diane asked, handing Randy the thermos she finally found.
“Oh”, I laughed, “that’s right, you guys play a lot of covers. Uh, no, it’s not important if you do”. Their taste in covers was pretty conservative: I remember a lot of Elvis (Jailhouse Rock sung by Randy, Hound Dog sung by Diane), Rolling Stones (Under My Thumb sang by both of them, Satisfaction sang by Diane), etc.
“I’ll set it up for you, it’s not a pay-to-play gig, either. Here’s my number…”
“Andy…from…Hollywood….Two…one…three…six…five..seven..” Randy very slowly wrote it down.

From that point on whenever I’d phone I was called “Andy from Hollywood”. Weird, I’m so not Hollywood, but to a weird rock couple from Lomita I was absolute Hollywood. That’s another thing, Randy and Diane lived in a weather-beaten house with some of the tallest weeds I’ve ever seen in funky Lomita, California. There was a crapped-out speed boat in the back yard, long gone from any Hemingway-like nautical expeditions. I’d come over for guitar lessons (I think I paid Randy $10 per lesson) and he taught me how to play badass guitar like him. They were the best music lessons I’ve ever had, and I’ve been to LACC and the Dick Grove School of Music. Of course there was coffee, Vanilla Wafers and Top Ramen. Lots of Top Ramen.

So, I got them into the Masque, but first they had to play 3 grueling nights at Gazzarri’s. They only played two, and actually got paid to not play the last night after the club saw how weird and “un-cool” they looked. Once they played the Masque everybody took them as their favorite band. Shows with tons of punk bands like X and The Last soon followed, including an attempt by the Go-Gos to steal Diane from the group to join them (she declined), and they even played the legendary Elks Lodge riot, where the LAPD brutally attacked hundreds of innocent punks from inside the dance hall. They even had a shot at a punk concert movie called “Urgh! A Music War”, which also starred Gary Numan, Devo, and The Police.

What went wrong? Well, they signed with Ratt’s manager, Diane moved in with him, they changed their name to something forgettable called The Zarkons, and made a couple of turgid records for MCA and Atlantic. Drugs got bigger and bigger in their lives until they stepped into the darkness and disappeared, and maybe if Andy from Hollywood hadn’t walked in and changed their lives they’d still be chugging coffee and playing Elvis covers in a Wilmington bar somenites.

I love the way you write. I can even smell it. More punk rock stories please.