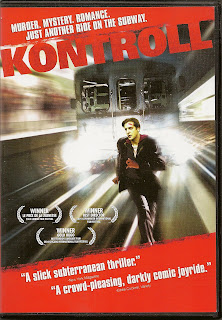 “Kontroll”, directed by first-time Hungarian director Nimrod Antal, is one of the most exciting films made in the past ten years. Equal parts suspense film, surreal mystery story, horror movie and even comedic satire, it is a breathtaking work of exhilarating beauty. Filmed in the Budapest subway system in 2003, Kontroll is one of those films that never leaves the indoor environs of the subway station and never gets boring, a pretty amazing accomplishment.

Kontroll is the story of a burnout named Bulcsu (Sandor Csanyi), a ticket inspector for the subway system who not only works in the subterranean station but lives and sleeps there, as well. Regarding the city above him with agoraphobic horror, he's shown lumbering around the subway station like a 21st Century Caveman and always appears to be in some form of bloody dishevelment. He’s the leader of his team of ticket inspectors, pretty funny stuff in that these teams behave more like street gangs than subway authorities. 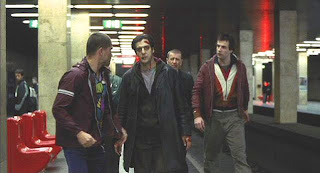 Bulcsu’s biggest rival is another inspector named Gonzo (Balazs Mihalyi), who challenges our hero to a unique game of chicken called “railing”, where they race each other down the subway tunnel with the non-stop Midnight Express racing behind them. Whoever reaches the arrival platform first wins the race. Antal films the railing scene brilliantly, suspense building with every shot.

Another matter is a mysterious hooded killer who leaps from the shadows and pushes riders off the platform to their death by subway train. After every murder the transit authorities show up, led by a cold-blooded executive (Gyorgy Cserhalmi) who looks creepier and more menacing than any of the inspectors. Could he be the killer? 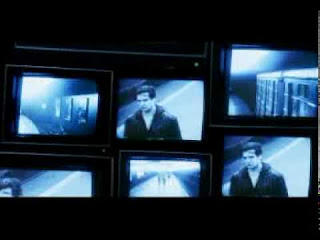 Kontroll never gets boring because there’s always something weird going on: a narcoleptic inspector who passes out whenever he gets confrontational, Bulcsu’s team chasing after Bootsie the Vandal, a psych called in to examine the nutty inspectors, and a dark, creepy rave party where Bulcsu pursues the subway killer.

Subway operator Bela (Lajos Kovacs) is also a burnout, and like Bulcsu spends his many hours eating and hanging out in his train with his daughter, Szofi (Eszter Balla). Szofi is every bit as nutty as Bulcsu and her dad, riding the rails in a huge teddy bear costume, and later in the film fighting off a team of inspectors in her bulky outfit.

After facing accusations of being The Subway Killer, Bulcsu, fed up, quits his job and finds redemption by allowing Szofi, no longer dressed as a teddy bear, but as a guardian angel, to escort him back up to the Big City and face the reality he had been hiding from down below. 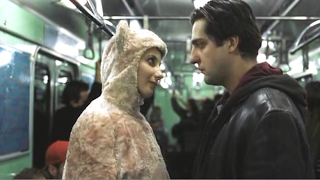 Bulcsu is probably the coolest scuzz in movies, looking like a cross between Mickey Rourke from “Barfly” and a Brendan Fraser from Hell. Even when he appears impassive to what’s going on around him you’re curious as to what’s really cooking around in his head.

Nimrod Antal’s excellent direction is complimented by Gyula Pados’ ingeniously framed cinematography - check out how many times he makes the tunnel look like spider webs - and bordered by a visceral soundtrack by Neo. Kontroll was the first Hungarian film to show at the Cannes Film Festival in 20 years and won the coveted Le Prix De La Jeunesse award. It also won the Best Foreign Language Film Award at the 2004 Chicago International Film Festival.

While there are a few inevitable plot holes in the movie, Kontroll is one of the most exciting and visceral films you’ll ever see, a dazzling thing of speed and beauty and I highly recommend it. 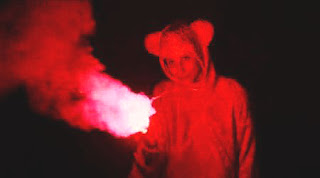 Carroll Baker faced a similar dilemma by following up her scandalous debut in “Baby Doll” with movies like "Sylvia", eventually going to Europe to star in “Baba Yaga”, an adaptation of the Guido Crepax comic “Valentina”, where Baker plays some weird old witch. While it’s somewhat better and more interesting than “Clockwork Terror”, “Baba Yaga” comes off as a sort of low-budget “Blow Up” with all sorts of occult hijinx to keep you from falling asleep. 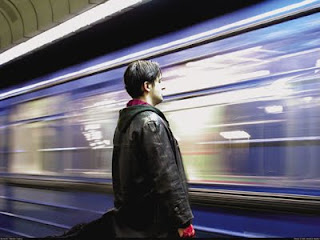 Kontroll is dark damp and claustrophobic. Railing is so suicidal, everything in this movie is like being buried alive. I wanted to bake in the sun after watching the movie.